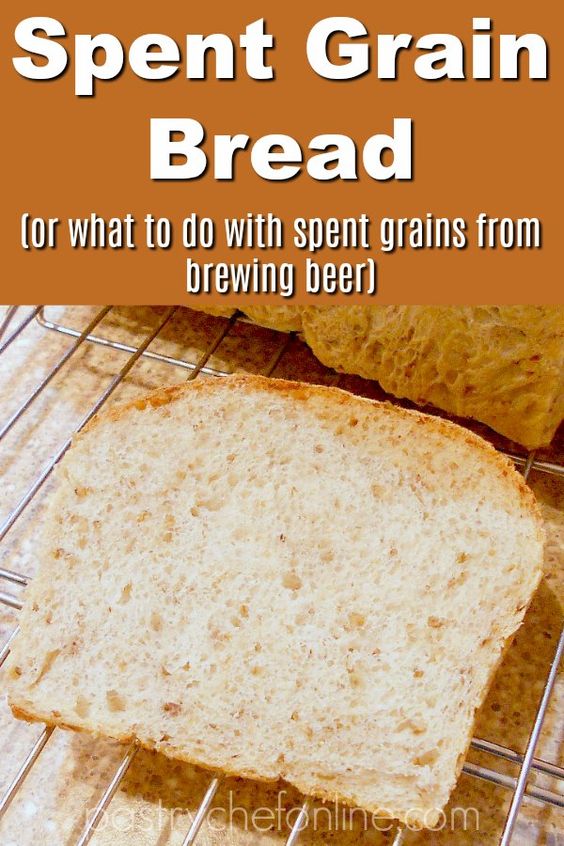 You can make a delicious spent grain bread using the grains left over from home brewing. Let me show you how.

Most bread made with spent grain tends to be hearty and chewy. And there is a time and a place for that. This loaf bakes up nice and soft and is perfect for making sandwiches. I also have a great recipe for spent grain crackers you might really like.

If you’d like to use actual beer in a yeast bread, try my Old Neighborhood Oatmeal Porter Beer Bread.

How To Use Spent Grains in Bread

Bread and beer are closely related and share almost the same ingredients.

And this Particular bread has even more in common with beer than most since I used the spent grains from The Beloved’s latest Brewing Escapade in the dough.

To brew beer, you can either use a malt extract, which is an evaporated form of what you’d get if you boiled cracked whole grains. Or, you can start with the cracked grains and boil them to extract a lot of the flavor.

The leftover grains–pounds and pounds, even for fairly small batches of beer–are generally composted or fed to chickens or otherwise tossed away.

This recipe is wonderful! Perfect for sandwiches. My husband and son love it. I made the loaves exactly the way the recipe reads. I’m already starting another batch. Thanks for sharing this amazing recipe.

Why Bake with Spent Grains?

But just because they’re called “spent grains” doesn’t mean that they are completely bereft of goodness. They still have some flavor left, a bit of the wort (pre-beer) clinging to them, texture, protein, and fiber–all good things, when it comes to bread.

And unless you like super soft white bread, you will appreciate the extras that come with baking with spent grains.

If you like a bread with a strong bready character and flavor, one with a moist, soft-yet-chewy crumb and caramelized crisp-chewy crust, then you are Totally in the right place. You must make this bread.

Should I Dry Out My Spent Grains?

The nice thing about this bread is you don’t have to start with dried grains. You can literally go from brew pot (once cooled down) to dough.

For some applications, like for making granola with spent grains, you’ll want to dry the grains out first.

The easiest way I’ve found to dry our spent grains is to spread them out on a half sheet pan and bake in a low oven (150F), stirring every 30 minutes, until dry and crisp.

Start Your Spent Grain Bread with a Poolish

What Is a Poolish?

A poolish is a type of starter for bread. A “proto-dough,” if you will, made up of flour, water and a touch of yeast. Its purpose is to:

Poolish is also generally considered to be equal parts, by weight, of flour and water along with a smidge of yeast.

So, the hydration of a poolish expressed in bakers percentages is 100%, since the flour and water are of equal weight. What you’re looking for is a bit like a pancake batter texture.

Remember our baker’s percentages from above? A poolish is made of a portion of that 100% of flour, and can comprise up to about 50% of the total weight of the flour.

NOTE: Since you want your poolish (and the yeast in it) to be nice and active when you start making the “brewers bread,” make the poolish no more than about 12 hours before you make the full bread dough.

Do You Have To Start with a Poolish?

I think you really should use some sort of starter, as it is what lends complexity and chew to your finished bread. Breads made with starters or pre-ferments like a poolish are chewier than breads made without. If you’re a fan of chewy bread, definitely use a starter of some sort.

I also turned the poolish into a sponge, which is another interim step that isn’t strictly necessary, but as I didn’t want to use very much yeast at all, making a loose sponge allowed the yeasties that were there to multiply and eat and stretch without having a heavy dough weighing it down. If you want to skip the sponge step, just add more yeast.

Want a little bread baking science? I shall give it to you.

In order to scale a bread recipe up or down, all ingredients can be expressed as a percentage of the weight of the flour.

However much flour you are using in your bread is considered 100% of the flour. Because 100% is another way of saying “all.”

The rest of your ingredients–liquid, salt, fat, spent grains, yeast–can be expressed as a percentage of the flour.

In regular sandwich bread, the liquid, usually water and/or milk, is scaled at 55-60% the weight of the flour. This percentage of water is pretty much the standard and allows for an even, tight crumb which is good for spreading butter on without it dripping through. In artisan-style loaves, the hydration percentage, or amount of water, is sometimes as much as 75%. That’s what gives you that lovely open crumb and big old holes. Lots of character, but not so great for a pb&j.

I purposely kept the hydration level of this bread to 60% so I’d end up with a nice sandwich loaf. If you’d like a more “artisan-style” loaf of spent grain bread, you can increase the amount of water in your recipe.

I just made this and it’s DELICIOUS! Used my spent grains from a honey wheat ale so they matched perfectly. I was planning to put this in a stuffing recipe but I doubt the bread will survive that long…this recipe is perfect.

Where Can I Get Spent Grains?

If you are a home brewer and don’t use extracts but cracked grains, you can just use the grains after you boil them.

If you’re not a home brewer or don’t have a friend who is, if there’s a craft brewery in your area, it’s worth it to ask for some of their spent grains. Chances are they will be happy to let you have some. Or find your local homebrew club and ask those guys.

If you can’t come by spent grains, you could easily substitute soaked grains such as oatmeal, farro or wheat berries. Or quinoa. You could even throw in some sunflower seeds, if you want.

I also just found out from a reader (thank you, Mary Anne) that there is a company called Our Grains that sells spent grain flours and dried spent grains. I have not used their products, but I am intrigued, and they are definitely worth checking out.

OK. Enough talk. On to the delicious spent grain bread. Remember, only make your poolish half a day or so (12-ish hours) before starting to bake.

Emily Roth (@madetrueblue on Instagram) made this bread after brewing some beer, and here’s what she had to say.

After last week’s batch of homebrew I used the @onlinepastrychef Spent Grain Sandwich Bread recipe to make a couple of loaves of bread. It’s amazing! Perfect as grilled cheese for sopping up tomato soup!

She also shared a photo on Instagram. See how beautiful?!

What Else Can I Make with Spent Grains?

Spent grains are pretty versatile. Use them wet or dried. Here are a few recipes for you to try:

If you also would like to know how to use brewers’ yeast to make bread, please read my post about that. For some other bread made using brewers’ yeast, try these recipes

Here’s the lowdown on the steps of making spent grain bread so you can plan you time accordingly. Note that most of your time will be spent waiting around for Things to Happen.

I’m not going to tell you you must buy an expensive stand mixer, although they do make life easier when making bread. You don’t even need bread pans, technically.

But there are two pieces of equipment I really want you to buy, because they are very versatile and you will use them for almost all your baking, and even some of you cooking.

Please get an instant read thermometer, and please buy a kitchen scale.

A thermometer is extremely helpful in knowing when all sorts of things are finished baking or cooking, from your Thanksgiving turkey to your Thanksgiving rolls or pumpkin pie, and just about everything in between.

And a scale ensures consistency of results from batch to batch of whatever you make. Please, please, make these two pieces of equipment part of your kitchen family.

How to Store Your Homemade Bread

You’ve worked really hard and spent a bunch of time making this bread, so you want to make sure to enjoy every slice.

Store the loaves at room temperature for up to a day. Once you start slicing bread, go ahead and slice the entire loaf, place the sliced loaf in a freezer bag, press out the air, and freeze.

Pull out pieces as you need them, microwaving them for 10-12 seconds to thaw or just letting them thaw naturally while you make your sandwich.

Or your toast with butter, jelly, and/or honey.

Reader Feedback on This Recipe

Reader Nicole made this bread and gave it a sparkling review!

I just made this and it’s DELICIOUS! Used my spent grains from a honey wheat ale so they matched perfectly. I was planning to put this in a stuffing recipe but I doubt the bread will survive that long…this recipe is perfect.

I hope you enjoy making and eating this spent grain bread as much as she did!

For the Egg Wash

Total Recipe Time does not include the hands off time of waiting for the poolish to...pool...or for the sponge to get bubbly.

Expect it to take 2 full days to make this bread, the vast majority of which is waiting around.