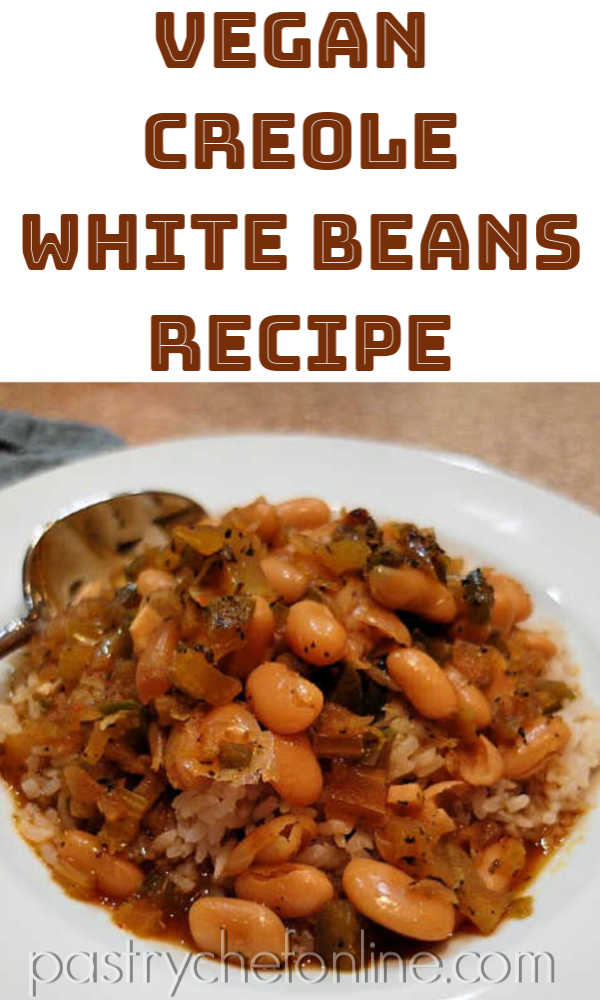 My husband and I really enjoyed this Vegan Great Northern Beans from The Great Vegan Bean Book by our friend, Kathy Hester.

In fact, the Beloved was so interested in eating these beans that he decided to make them himself!

If you’re a fan of easy, vegan recipes and Creole or Cajun flavors, you will love this recipe as much as we did!

I was sent a copy of The Great Vegan Bean Book for review. All opinions are my own.

Note that my husband, The Beloved, wrote this post. Anything written in italics, I have added, but the rest is all him!

What You'll Find in This Post Click to view ToC
1 Making Room for Vegan Meals
2 Other Vegan Recipes on Pastry Chef Online
3 What Kind of Beans to Use
4 The Great Vegan Bean Book by Kathy Hester
5 Procedure
6 What Do These Beans Taste Like?
7 How Long Does It Take To Make?
8 Adding Meat (If You Want)
9 How Many Does This Recipe Serve?
10 Vegan Great Northern Beans
10.1 Ingredients
10.2 Instructions
10.3 Notes
10.4 Recommended Products

It all started when Jenni and I sat down and perused the pages of Kathy Hester’s latest (at the time) release, The Great Vegan Bean Book.

This is a great book, even for folks who like to eat meat. Kathy puts beans in everything from breakfasts to desserts. Her writing style is very accessible, and she gives plenty of options for bean choice.

Now, I am by no means a vegetarian, let alone vegan. I’m a proud omnivore, but that doesn’t mean I don’t appreciate tasty and healthy food of all sorts, even if there is no meat involved.

I will even occasionally go out of my way to enjoy such eats locally. I can definitely tell you that I have never gone out of my way to cook in either of those styles (vegetarian or vegan); it happened from time to time when I was a starving graduate student, but not by choice.

I have quite a few vegan recipes on the site. If you are looking for an easy savory option, try my shortcut vegan lahmajoun. You may also really like my creamy Mexican pasta salad that has a vegan option.

What Kind of Beans to Use

The recipe for these vegan white beans only calls for white beans and not one specific variety.

You could go with:

The flavor will change slightly from bean to bean, but it will still be every bit as delicious!

Beans are inexpensive, filling, and nutritious, so you may as well stock up. It’s fun to get some heirloom varieties to play with, too.

NOTE: Post written by The Beloved. Text in italics and/or parentheses is mine.

So imagine my surprise (and Jenni’s) when, as we were paging through recipes and photographs, I say, “You know, we should try some of these out; they look really good.” (Huzzah, Beloved!)

After some discussion, I even volunteered to try putting a dish together solo.

I made him do it.

Now friends, other than cranking out Free Range Fruitcakes every fall and the infrequent bachelor meals when Jenni is out of commission, I haven’t done any substantive amount of from-scratch cooking in over a decade.

I’m a little rusty, so I wanted something that:

After going back and forth through the book a few times, I settled on Creole White Beans made with great northern beans, but there were a lot of contenders.

We very much liked the sound of Pesto White Bean Salad, Brown Rice Fava Bean Risotto, New Orleans Red Bean Jambalaya, and I still have my eye on the Vanilla and Rosewater Parfaits.

The Creole white beans recipe had both stove-top and slow cooker options, as well as a choice of canned or dry beans.

I chose stove-top and canned for the sake of brevity, but the next recipe I try (yes, there will be more!) will be dry beans in the slow cooker.

The recipe was pretty straightforward

The recipe calls for veggie bouillon and “the appropriate amount of water,” but I opted for low-sodium vegetable broth. Why? Because I told him it was okay.

Because we didn’t have bouillon and it tends to be too salty right out the gate.

Like Jenni, I am a big proponent of proper seasoning, especially salt, but I prefer to have more control over it than not. He’s such a good student!

Kathy specifically mentions the creaminess of this dish in the introduction at the top of the page, and she’s right.

Between the sautéing and the natural smoothness of the “meat” of the white beans, the texture and taste was great; creamy with some (but not too much) spiciness.

It was not al dente, but it was also not mush, which can easily happen, so definitely watch the cook time and try the beans every few minutes to get the texture you want.

How Long Does It Take To Make?

Total time from prep to plate was 60 minutes, plus a few to let it cool off enough to eat.

It would have been less if I had started the rice earlier in the process. Did I mention I was rusty?

As for the rice, I used veggie broth for part of the cooking liquid. Why? Because I could! And it also brought some flavor to the party.

Rice can easily be bland, and even flatten the flavor of what is poured over it, if it isn’t seasoned properly in and of itself.

Ahem. I made the rice. Because he asked me to. He is taking Liberties with the story. I thought you should know. Carry on, Beloved, but I’ve got my eye on you…

Adding Meat (If You Want)

As for taking this out of the vegan/vegetarian zone, it’s as simple as using chicken broth instead of veggie if that is what is lying around in your cupboard.

You can certainly add animal protein in a variety of forms.

If I do, it would probably be chicken, but you can use any meat that wouldn’t overpower the beans and spices (i.e. no goat or lamb). Or Andouille sausage would be spectacular.

How Many Does This Recipe Serve?

This particular venture actually yielded 6 portions instead of the 4 stated in the recipe, and you could certainly scale it up even further for larger groups or for freezing left-overs for later on.

I really hope you love this recipe, you guys!

If you make it, please share a photo with me, either in the PCO Facebook Group or on instagram by tagging @onlinepastrychef and using hashtag #pcorecipe.

Leftovers will be good in the fridge for up to 7 days. Reheat thoroughly either on the stove top or in the microwave.

Beans and rice freeze really well. Put leftover rice and the beans in separate zip top freezer bags, being sure to press out as much air as you can before sealing. Store in the freezer for up to two months.

Thank you all for spending some time with The Beloved and me today, and thanks for reading.

Have a lovely day.