Disclosure: The lovely folks at Page Street Publishing sent me a copy of Dumplings All Day Wong to review. Thanks, guys! Any links to the book are affiliate links. 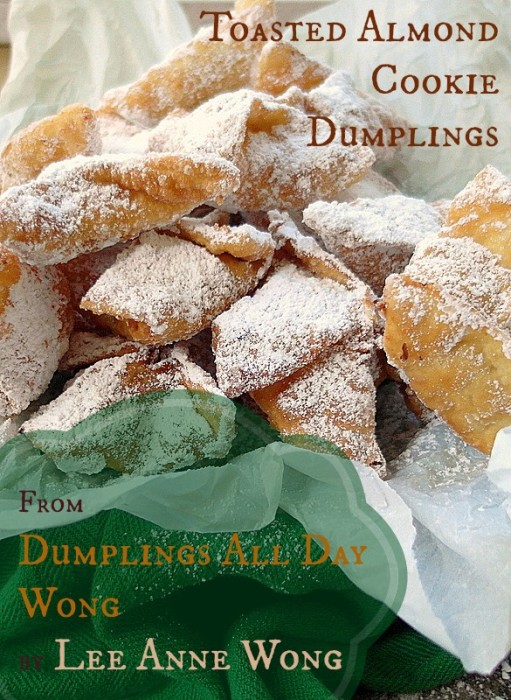 I am not a patient person. That’s why I don’t make a lot of cookies. There’s all that scooping and baking sheet after sheet. And God forbid I have to decorate a cookie. Every cookie. One at a time. Until I want to stab myself. Many folks find  repetitive activities–knit one, purl two; cutting out cookies; rolling truffle–to be calming and soothing. They say it takes them to a place where they no longer even have to think about what they’re doing, freeing their minds for deep thought or contemplation. For me, it just makes me feel stabby.

For ease of browsing, see all of my cookie recipes here.

Because I have this aversion to repetitive motion–maybe it comes from having  to make a billion cheese biscuits every day at the restaurant–I was a little hesitant about reviewing Dumplings All Day Wong. Because I knew I’d have to actually make dumplings. Including the dough. And rolling it all out into wee circles.

Then I remembered how much I adore the few types of Chinese dumplings I’ve had before. Steamed or fried, and usually filled with some sort of pork mixture,  I really can’t get enough of the texture or the flavors. The chewiness, the juiciness. Oh! And then I remembered that because I don’t usually enjoy repetitive tasks, I have never given anyone a sweater I’ve knitted, because I’ve never knitted a sweater. We don’t enjoy decorated cookies on holidays, because I don’t make decorated cookies. And the last truffles I made were for the restaurant.

So I said yes.

I’m so glad that I did, because while it was fairly tedious to roll and fold each wee dumpling, there is something that is kind of magical about the end product. And I learned a lot. I got to make a lightly sesame-scented dough made with boiling water. I got to make frangipane, which I haven’t made in ages. I got to deep fry, which is always fun because of the Danger Factor. And I got to sieve powdered sugar all over these warm treats, and then shove them in my face.

It should come as no surprise to you, given my aversion to repetition, that I didn’t know much about making dumplings. And now I know a ton about it. Because of this book. Lee Anne Wong’s tone is so inviting, casual and helpful that you really do feel like you can’t mess up. And she does say that, as long as the dumplings are completely sealed, they will still taste delicious, even if they won’t make the cover of Dumplings Monthly.

I expect one subject cookbooks to serve as an encyclopedia for pretty much everything there is to know about that one subject, and Dumplings All Day Wong doesn’t disappoint. The chapters are arranged by dumpling shape, with great step-by-step photos of how to complete the different types of folds. Within each chapter, the fillings range widely from more traditional Chinese offerings of my beloved pork dumplings and potstickers to more fusion-y types of dumplings like Brussels sprouts and bacon dumplings and Korean fried chicken dumplings.

Let me give you a quick run-down of the chapters and how they’re set up: 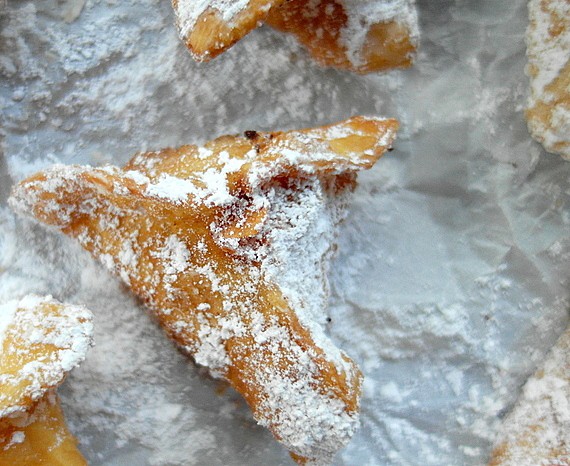 I of course chose to make a dessert dumpling. This idea alone helped expand my definition of dumplings.

Even though Wong says that we can start with purchased dumpling wrappers, since the dough is such an integral part of the dumpling I wanted to make sure to give the dough a spin too. For the purpose of a review, making dumplings from a dumpling cookbook without making the dumpling dough would be like trying to review a pizza cookbook using Boboli.

And thus I found myself kneading very hot dough until it was smooth, elastic and not at all sticky. My dough actually ended up being a touch sticky, so I rolled my wrappers on a floured surface. I think had I kneaded a bit longer the dough I thought was too dry would have come together nicely as the flour hydrated. Otherwise, the preparation method was very straightforward, and the dough smoothed out beautifully during its rest on the counter (anywhere from 15 minutes to 3 hours. Mine rested for close to 3 hours and was definitely more sticky once I unwrapped it).

The filling was also very easy to make. The ingredient amounts are listed in both volume and grams, and it called for 1/2 cup of sliced almonds with 85g in parentheses. I began weighing and quickly realized that 85 grams was a lot more than 1/2 cup. I measured out 1/2 cup, and it weighed 55 grams. Since the book is meant primarily for American audiences who don’t use scales very often, I went with the volume measure. The recipe states that it makes enough to fill 40 dumplings at about 1 Tablespoon of filling per dumpling. I had enough filling for 23 dumplings. I’m not sure why the huge discrepancy, but I’m fairly certain I didn’t use too much filling in my guys. It’s no big deal, because honestly, by the time I’d rolled and folded 23 dumplings, I was more than ready to be done with that part! 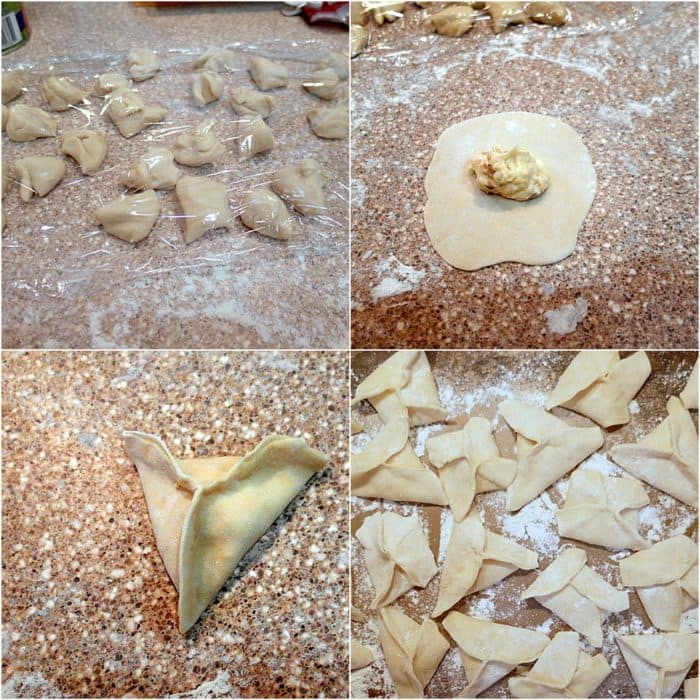 If you’re a dumpling ace, you will be fine. If you’re like me and a dumpling novice, know that it will take you a bit of time to roll, fill and fold each dumpling. Lee Anne Wong says she can fold 6 dumplings a minute. Bully for her. It took me about 2 minutes per dumpling, including the rolling. If you are using pre-made dough, still count on about 30 seconds to 1 minute per dumpling. You might want to grab a friend or three to help. Or if you are one of those people who goes to their happy place while doing repetitive tasks, enjoy your hour or so of Zen.

Of the 23 dumplings that I folded–some in a triangle fold and some in parcel fold (4 folds)–four of them fell apart in spectacular fashion in the hot oil. It was probably a combination of not having a good enough seal and letting some air be trapped inside the dough. 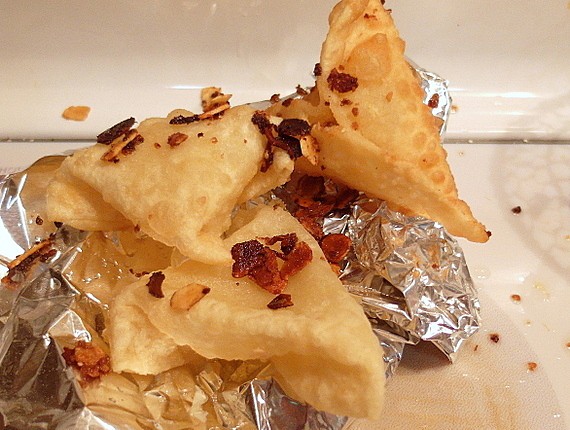 Do yourself a favor and press out as much air as you can when folding and sealing, and make sure your seams are really deep to save yourself the sadness. Still, 19 dumplings all golden, crispy, chewy and sweet? I was pretty happy! If you are an almond fan, you will definitely love these little guys. 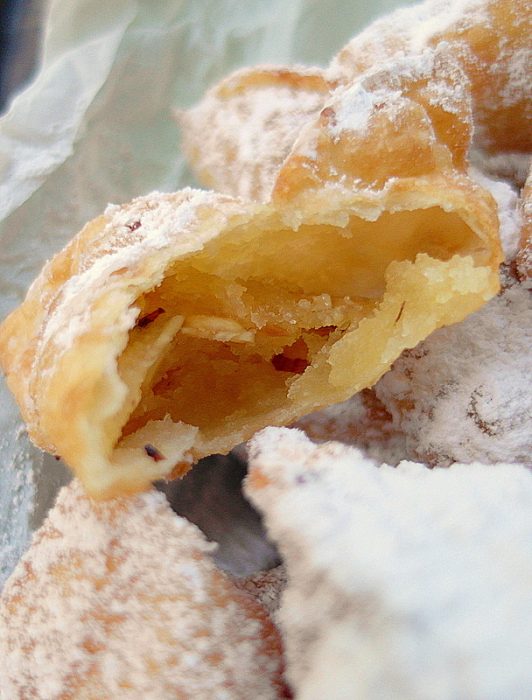 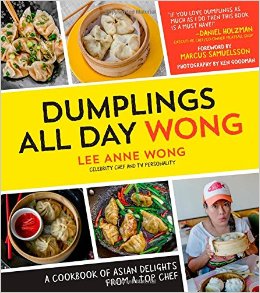 Hopefully I’ve convinced you that this is a book you want to own, especially if you are a fan of Asian flavors and techniques, of Lee Anne Wong herself (whose personality shines through on every page) and/or of repetitive tasks that yield tasty results.

Thanks so much for spending some time here today. Take care, and have a lovely day.