Introducing Spiced chocoflan ice cream. I originally made this as a way to use up a botched spiced chocoflan I made. If you don’t want to make chocoflan just to make this ice cream, feel free to use bits of chocolate brownie instead.

Don’t miss the round up of all my ice cream recipes. 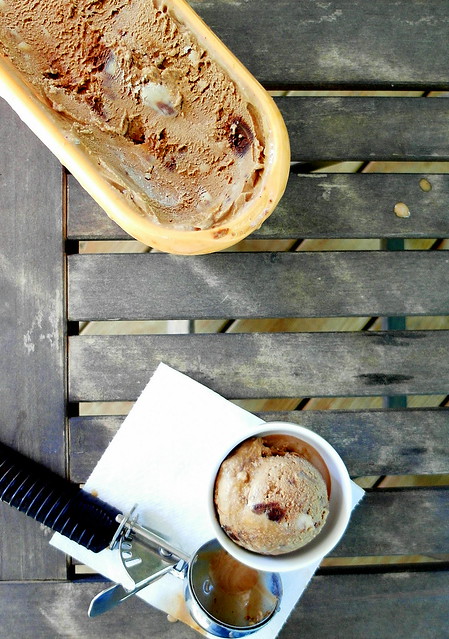 I honestly had no idea what sort of ice cream I was going to make this week, until I tried and royally messed up some chocoflan. The whole point of that magical dessert is that chocolate cake batter is less dense than flan batter, so when you bake them together, the chocolate layer floats to the top, becoming the base once you turn it out. Unless you decide to use brownie batter. Since brownies aren’t made with The Creaming Method, they are super dense and don’t have many air bubbles that would send the batter soaring in the oven.

One would hope I am smart enough to know this. Apparently not smart enough on the day I actually made these guys. As a Hail Mary save, I dumped all the ramekins of half-baked brownie and flan into a baking dish, swirled it all together with some dulce de leche, and finished baking it. It was delicious but so rich that cutting it up into wee pieces and folding it into ice cream seemed a very good idea indeed. 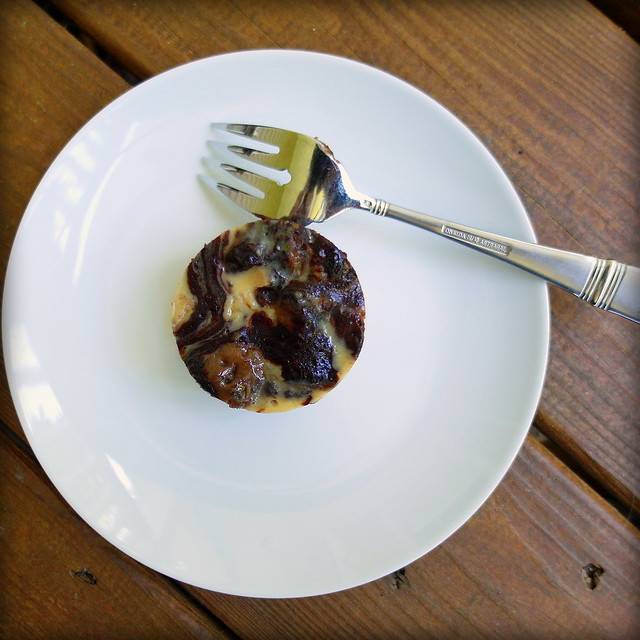 Ice cream really does make everything better. As a matter of fact, now that I have an ice cream maker, I have yet another tool in my toolbox for dealing with leftover dessert sauce or cookies or cake that won’t turn out of the pan cleanly. A cause for celebration, for sure!

Here’s how I came up with my flavors.

With my American’s simplified understanding of Mexican cuisine, when I think “Mexican,” a few key flavors leap to mind: chocolate, cinnamon, chiles. So, the plan for the chocoflan was to lace the brownie layer with chipotle powder and espresso powder (Mexican coffee is a Thing, right?) and kiss the flan layer with cinnamon. Mission accomplished in the batter creation arena, but huge fail in the execution. Still, since all the flavors were there and worked beautifully together, I knew that they’d be lovely in an ice cream. 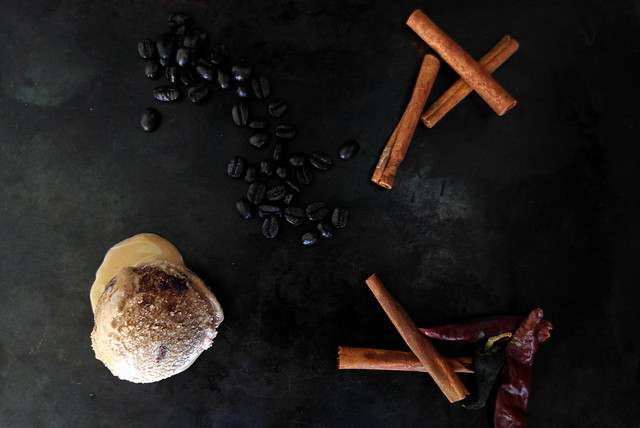 Coffee ice cream seemed the best choice, especially since I’d used a hit of Kahlua in the brownie batter, so that’s what I went with.

I had smooshed a spoonful of dulce de leche into the bottom of each of my ramekins, so I melted a bit more down to use as a swirl in the ice cream, and Spiced Chocoflan Coffee Ice Cream was born.

I’m going to share the coffee base first, because it’s really delicious on its own. From there, you can swirl in what you like. I’ll post recipes for the chocoflan brownies, but I’ll write up the procedure so you won’t be sad and sullen like I was. That way, you can enjoy your chocoflan brownies without woe and then use them in some ice cream if you feel like it. 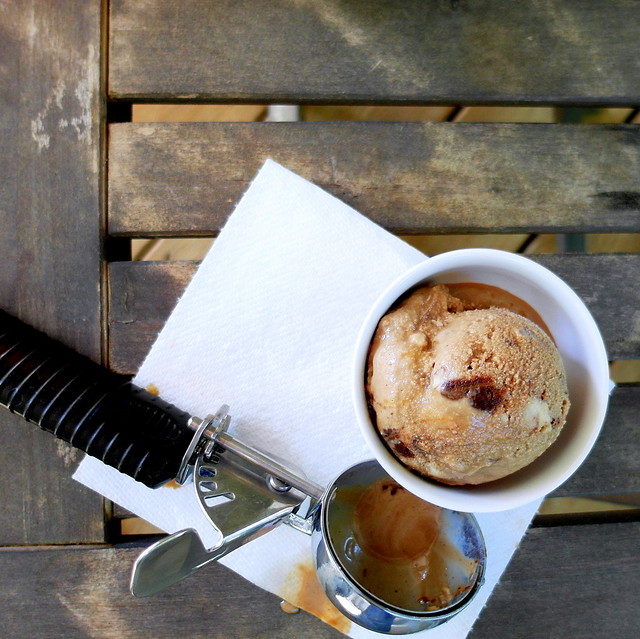 The brownie base is my beloved Cook’s Illustrated Brownies that live over on the now-defunct ToastPoints Blog, sans nuts and gussied up with chipotle powder, espresso powder and a hit of Kahlua. The flan mixture is lifted more or less straight from this recipe with the addition of some salt (No salt in the original, really? This stuff is so sweet it needs salt for balance!) and cinnamon.

To Turn it into Spiced Chocoflan Coffee Ice Cream 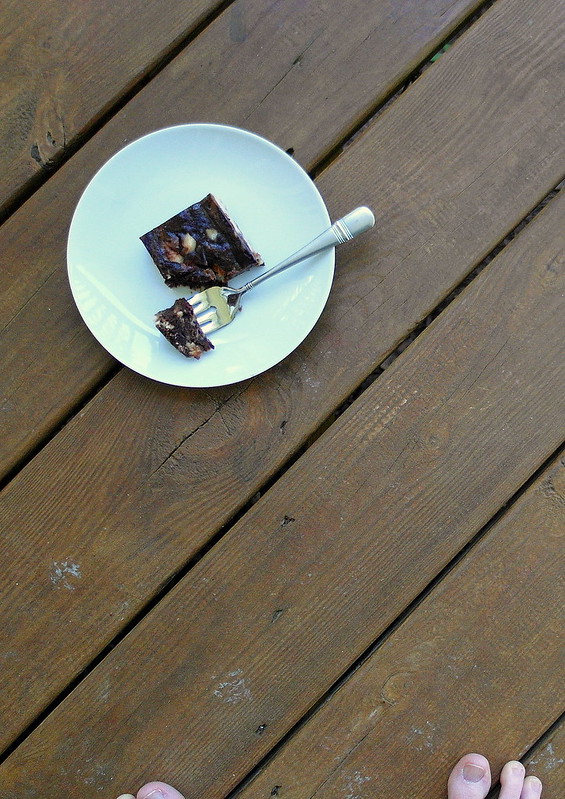 And there you have it. A mistake turned into Ice Cream Gold! Yay! And you really will love the ice cream. All the flavors come through in little pockets–it’s fun to get a spicy bite of brownie every once in awhile, but if you’re not a fan of spicy, just don’t use the chipotle powder. It’s your ice cream Tuesday. Make it how you like it! 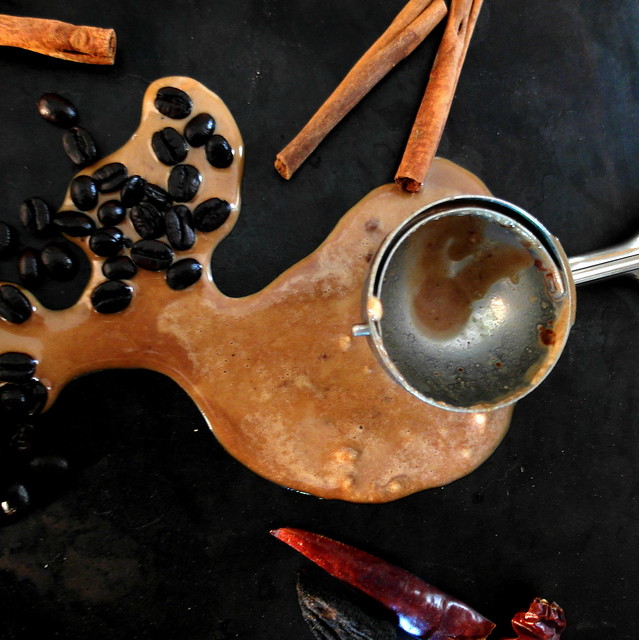 I hope you enjoyed this edition of Ice Cream Tuesday. If you’re looking for something savory on this fine day, why not check out Taco Tuesday over on Chez Us? Thanks for spending some time here today. Have a lovely day.