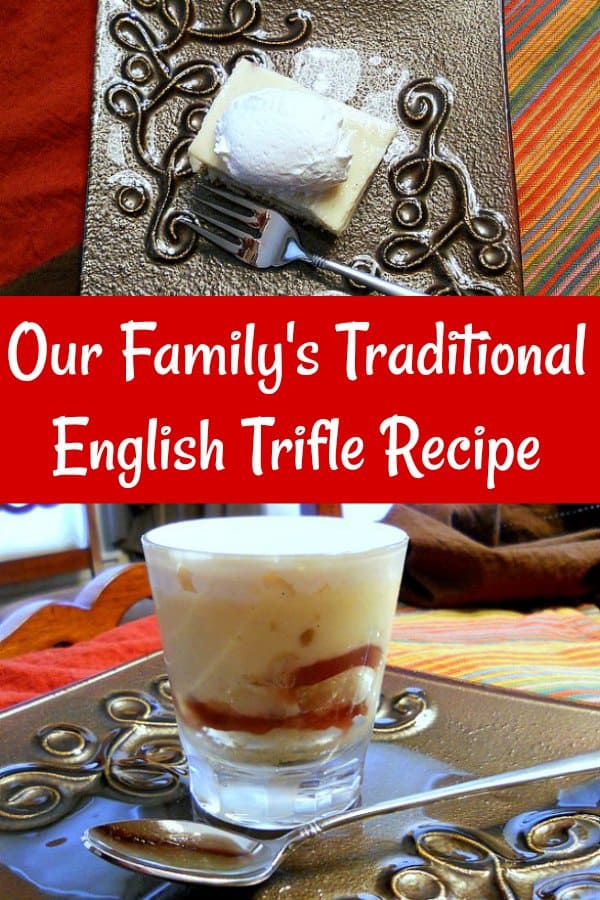 I am so proud to share our family’s traditional trifle recipe with you guys. It is one of my favorite desserts, and it’s a must have for Christmas every year. 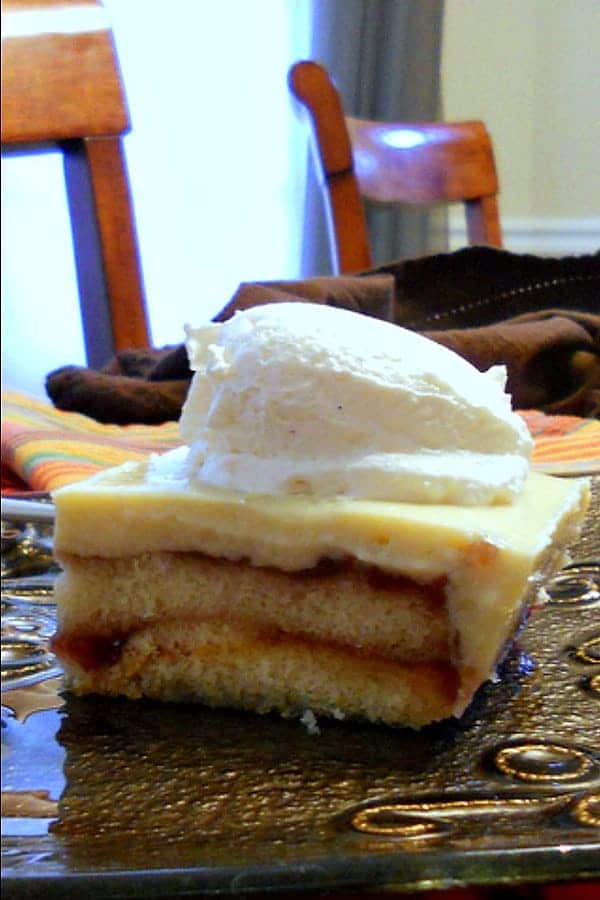 If Auntie Ev had known about wikipedia, I would think that she is the one who wrote the Trifle Wiki. Here’s what it says:

Trifle is a dessert dish made from thick (or often solidified) custard, fruit, sponge cake, fruit juice or jelly, and whipped cream. These ingredients are usually arranged in layers. –Wikipedia.org

Of course, she would also have also included in the definition a splash or five of sweet dessert wine. In our family, that equals sherry. Cream sherry. It’s cheap. It’s sweet. It’s boozy. It reminds me of childhood Christmases.

Not that our Christmases were Boozy Bacchanalias where red nosed Friends of the Family forced Christmas cheer down the gullets of toddlers. That sounds like a deleted scene from A Christmas Carol, actually. One that Ebenezer was forced to witness by the commanding bony finger of the scariest spirit of all: The Ghost of Christmas Yet to Come. And that has absolutely no place in our tale, so let’s just move along. 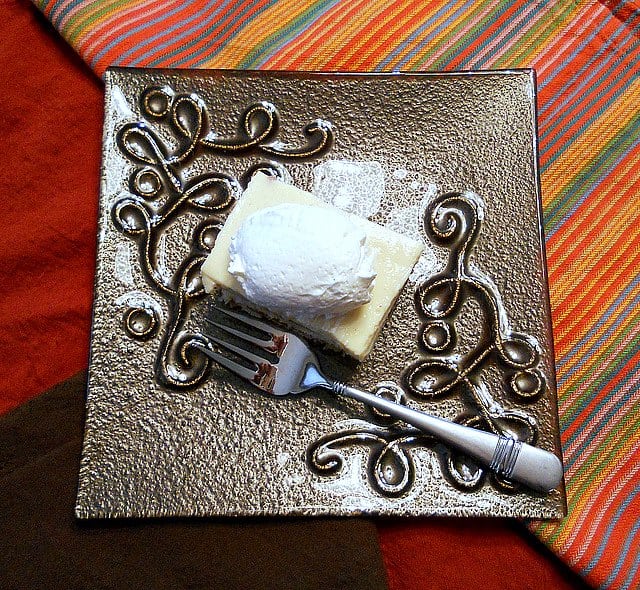 We make our trifle in a 9 x 13 Pyrex dish and then cut slices. You can always layer them individually in dishes if you prefer.

Rather, Auntie Ev baptized the layers of lemon pound cake in her trifle recipe with a healthy drizzle of cream sherry, the flavor of which goes spectacularly well with all the other elements in this particular trifle.

I have eaten other people’s trifles. I’ve read a bunch of different ingredient lists calling for everything from cubed brownies to mandarin orange slices to kiwi to strawberries to Jell-o all bound by boxed pudding.

But this trifle, Auntie Ev’s trifle, is really the only trifle you need get to know.  I’m serious.

The ingredients are simple and few, but the dessert itself is one of my favorite non-chocolate combinations ever.

While lots of trifles are Constructed of many repeating layers in tall, straight-sided, footed trifle bowls and are served by scooping out a portion and serving it in a bowl, Auntie Ev’s trifle is traditionally constructed in a rather unassuming 9″x13″ Pyrex baking dish. There is no layer-jumbling scooping that occurs. Nope.

Auntie Ev’s trifle is slice-able and gets served in perfectly square pieces with a maraschino cherry plopped right on top of the whipped cream. I have no idea whether this was Auntie Ev’s refinement or if that’s the way her mom made it before her, but it does look lovely on a plate, much more so than a big old scoop of multilayer-ed trifle that gets dumped in a bowl. 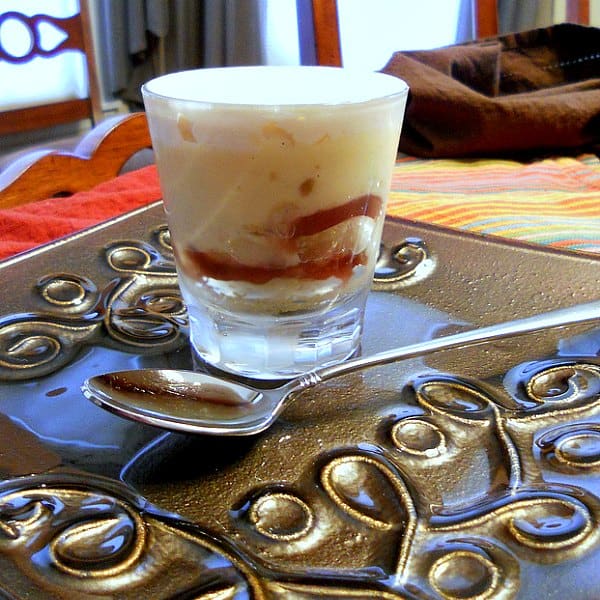 I don’t use the cherry anymore, but you can add them if you want!

Auntie Ev used to make her lemon pound cake for trifle, but the cake you choose to use is up to you. Make your favorite or try a simple version of Van Halen pound cake. A frozen pound cake will even do. I’ve made great versions of Auntie Ev’s trifle recipe with Sara Lee pound cake. The sherry saves it.

Let’s make some trifle, shall we?

If this recipe sounds great to you, please rate it/and or comment. I love hearing from readers!

I even served a version of this trifle at the restaurant. For that, we used lemon sponge cake, a sherry soaking syrup, house-made raspberry jam, vanilla pastry cream and whipped creme fraiche. I served it with a lemon sabayon and a raspberry coulis. It was rather a hit. But even all gussied up, at its heart, it was always Auntie Ev’s trifle. 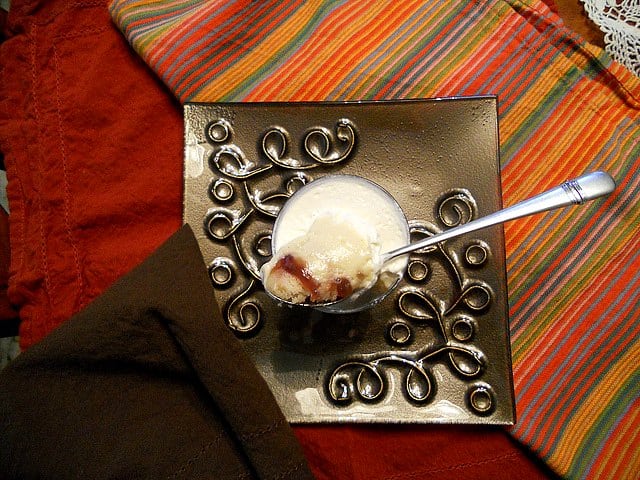 And I think that’s what makes it taste so good.

Thank you so much for reading, and if I don’t see you again before Thanksgiving, I wish you the very best and tons for which to be thankful.

Have a lovely day.