Jump straight to the recipe.

I have never been big on crafting. My best friend Julie used to make me participate in one obligatory Christmas craft per year, and as a result, I am the proud owner of an okra pod Santa, a wee snowman made out of an ice cream spoon and a Christmas tree with button ornaments. They are cute, but man was it a messy process. Not for Julie. No–she works clean and is generally not messy. Me on the other hand? It’s inevitable that I end up with hot glue on my fingers, paint in my hair and most likely also on my clothes and glitter all over the floor. I am a wreck. The vast majority of the times The Beloved and I go out to eat, I end up with at least one spot of food–in a startlingly contrasting color to whatever I happen to be wearing–either on my shirt or on my pants. If I wear white, which is rare, I end up with tomato sauce or salsa on it. If I am cagey and decide to wear a dark color to hide the inevitable spot or streak of food, I’m Jackson Pollacked with Alfredo sauce. The Beloved tells me it’s a gift. I doubt it. I am a messy, messy cook. I mean well, but if it can be spilled, I will spill it. If gravity is working, at least one or two items will fall to the floor. This is not a good trait in a cook and baker. I had to be very strict with myself when I was working in professional kitchens. I learned to work clean, and it kept me from getting yelled at. At home though, I am still very messy. I also tend to fly by the seat of my pants.

I usually begin cooking or baking with a vague sense of what I want to do, and just as often as not, I end up switching gears mid-stream. It’s hard to get your mise en place together if you don’t know exactly what mises you will be placing, you know? I mean well though, and I prep as much as I can. Still, when I get an idea, I just run with it, mess be damned. Yesterday was Savory Apple-Onion Tart day. Not on any food calender, but in my brain. My initial thought was to just chop everything up and throw it all in a tart shell. It would be rustic. And then, I thought about my friend Liz from That Skinny Chick Can Bake.

From where I stand, Liz has magical powers. Powers of Cleanliness, Orderliness, Sleekness. The food she makes is always gorgeous. Even if she writes that she and her family didn’t really like whatever it was that she made, the photos are always clean, elegant and classy. It’s kind of uncanny, and very un-Me. Let us take a moment to regard Liz’s work. (All photos used with permission–thanks, Liz!) 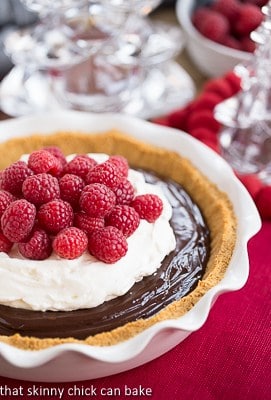 Seriously, y’all. Look at her perfect graham cracker crust. I can’t take it. 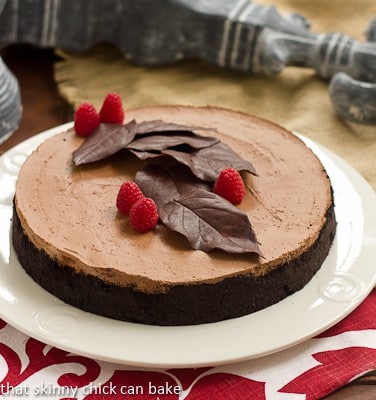 Yes, she made the leaves. Made them, people! Look at these–they are gorgeous! Gah!

I tried my hardest to channel Liz while making the tart. Not to just toss everything together but to really give it some thought and make it look classy and That-Skinny-Chick-Can-Bake-ish. Liz, I hope I made you proud. I tried! That lovely sunflower of apple slices hides a very lot of sauteed onion, celery and Craisins.

I am not sure why I keep writing about savory tarts. Maybe because I was so inspired by the Mushroom, Thyme and Chevre Tart from Baking by Hand (see their ad at the top of the site for one of the best baking books I’ve had the pleasure of reading).

This particular tart is full-sized, but you can also make these in mini-cupcake pans. What you’ll end up with will be Eminently Poppable Bites for your Christmas and New Year’s Parties. It’s funny. Folks don’t think twice about the apple-onion combination when it’s used in stuffing, but leave out the bread and people think you’re being radical. Give it a chance. I think you’ll find the Savory Apple-Onion Tart to be reminiscent of stuffing in a very delightful way. The flavors are more intense since there is no bread to spread all that goodness out. That might be the best reason of all to make them bite-sized, but you know me. I generally don’t go in for fussy, and it’s way easier for me to make one big tart than a bajillion little tarts. Plus, I got to practice my Placement Skills with the apple slices. Here’s the trick to that, by the way. Slice your apples very thinly–mine were about 1/8″ thick, and some a bit thinner than that even. Toss them with a heavy pinch of salt and about 2 Tablespoons of sugar, and then let them hang out in a colander over a bowl for about an hour (if you’re making a sweet tart, scale the salt down to just a regular pinch). They’ll lose some of their liquid–which keeps your tart from getting squishy–and they also become much more pliable. You’ll even be able to roll the really skinny ones up into little roses like I did in the center. Pretty keen.

Oh, and let me tell you about the pie crust. I will be making a Little Video to show you how to make it (I’ll embed it later. Promise), because one can never make Too Many pie crust videos. Besides, this one will be set to music. At any rate, it’s a standard 3:2:1 pie crust: 3 parts flour, 2 parts fat, 1 part liquid, that I modified just a bit. I upped the fat by just a smidge so I could add in a bit of my piggy lard. I’ve been dreaming about a savory tart made with piggy lard in the dough for awhile now, but I didn’t want to use all lard since mine is fatback lard which is decidedly piggy.

Leaf lard is actually best for making pies, both because of its crystalline structure for optimal flakiness and its almost nonexistent pigginess, but since I don’t have any, I used mostly butter and added in just a bit of the piggy lard. The liquid is water with some apple cider vinegar in it (acids help to keep gluten in check), and the only other flavorings were about 3/4 teaspoon salt and a handful of sugar–maybe a tablespoon or so. Can you see that blistering? That’s how thin the layers are. What a lovely dough to work with!

After mixing it all together, it got five rolls and folds (roll, fold in thirds like a business letter, roll again, fold, refrigerate, etc) so it would be really flaky but not puff up too much. It worked out very well–tons of flaky layers, crisp on the outside and tender on the inside without any real puffing up at all. Huzzah!

As the filling stands now, it’s vegetarian. That means little with lard in the crust though, so in for a penny, in for a pound is what I say. Next time, there will also be sausage in this tart. And feel free to make it with your favorite stuffing combination. You like chestnuts? Toss them in. Wild rice? Absolutely. Oysters? Why not–it’s your tart!

Here’s how I made mine, and I even measured some stuff, since I folks enjoy measurements.

For the Crust (Makes 2, so freeze one for later or halve the recipe)

For the Tart Filling

I know that sounds like a lot, but most of those instructions are for the craft project portion where you’re placing apple slices. If you’d like your tart to be more rustic, simply chop up all the apples and mix them in with the onions and then put the whole shebang in the tart shell. But remember, if I can very occasionally class things up, so can you! If any of you decides to make a savory apple onion tart or mini versions for appetizers, I’d love to hear about it.

Thanks so much for spending some time with me. Have a lovely day.