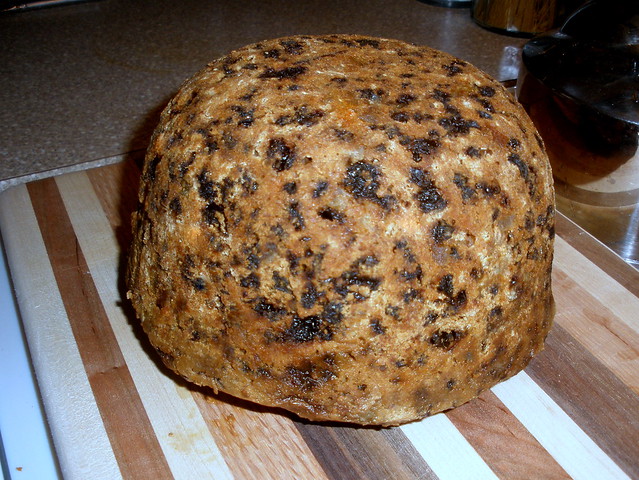 The plum puddings I made last week are not good enough to serve for Christmas. Why? It’s not because they turned out badly. They actually taste quite good. But I didn’t task myself with making Plain Old plum pudding. My task was to make–to recreate–Auntie Ev’s Plum Pudding. That means everything had to be perfect. Auntie Ev’s was a very dark, dark purplish-black color. What I made was a light caramel color with a bunch of raisins and currants dotting it. It looked like Spotted Dick, and I knew Uncle Ray would have nothing to do with it.

I had showed Ken (their son) the picture of the pudding on my blog last Sunday when we saw him for his wife’s birthday, and he was all, “That’s the wrong color.” And I was all, “If he (meaning Uncle Ray) says anything about it on Christmas, I’m going to stab him.” And then he said, “You’d better warn him as you’re serving it that it doesn’t look the same as mom’s.” At that point, I realized I would just have to admit defeat and start over.

And then, I had a Revelation. I realized last night that, although there are plenty of able-bodied people left in our family, nobody but me has ever tried to step up to the Plum Pudding Plate. They’re all Thrilled that I’ve stepped up, mind you, and now the Armchair Quarterbacking commences. I spoke with my Sainted Mother yesterday, and I called her out on this whole “How come you’ve never made the plum pudding?” thing. And she said it was because she didn’t want Uncle Ray to be mad at her if it was wrong. Coward.

Here’s the thing about the plum pudding. Auntie Ev could have taught someone how to make it. She could have written out detailed instructions. She could have at least passed it along in the Oral Tradition. But she didn’t. I guess nobody really thought about what that meant, but what it means is that no Auntie Ev=no Plum Pudding. And so everyone is left staring at each other, wondering who’s going to take the proverbial grenade and step up.

Let me back up a moment to the Chat with my mom last evening. I told her that I was probably just going to have to make another round since the pudding wasn’t dark enough. See, I had Gained some Insight from Ken. He told me that Auntie Ev used to put all the fruit and peel through the food mill. Not just the suet like my mother told me a couple of weeks ago. So then, on the phone last night, mom said, “So, I remembered that Grammie (my dad’s mom) used to run everything through the mill. Not just the suet.” If she had been in the same room with me, her next move would’ve been to duck to miss being konked in the noggin by whatever I could reach and throw.

So then I said, “I’m just going to whir everything up in the food processor.” And she said, with a note of horror in her voice, “No! It won’t be the same.”

“Listen, Armchair Quarterback Mother. I’m the one who’s making the stupid thing because all the rest of you are too Skeered to Step Up, so I’m using the food processor. Besides, if Auntie Ev had had access to one a billion years ago when she started making them, she’d have used it.”

I realize that the texture will still be a little different, mainly because the food mill would keep all the skins out of the mix, but the food processor deal did a Very Good Job. A warning to anyone wanting to mince dried fruit up in a food processor. Do Not Leave It Alone. Pulse it, because once the fruit starts getting cut up, it’ll come together in a Ball of Stickiness that will bring your food processor to it knees. Seriously. My KitchenAid is disgustedly packing up its stuff and hitching a ride Away from Me even as I type. Please don’t go, food processor. I promise I won’t ever do anything like that to you ever again.

Anyway, the mix looked good and tasted good, and the batter was a deepish brown. I figure that’ll translate to dark purplish-black after all of the steaming.

I’ve gone the Long Way Around to come to my point. Which is this:  while I happily and confidently shoot from the hip with most of my cooking and some of my baking, not really concerning myself with pesky recipes, I have again come to appreciate that sweaty/hot/cold feeling of “Will this turn out okay?” that I used to get back when I had no idea what I was doing in the kitchen. Auntie Ev’s “mix everything together” held many, many secrets. I realize that directions that I don’t think twice about–sweat onions, cream butter and sugar, dice mirepoix, etc–are just as enigmatic to folks just learning to cook and bake.

It’s a journey, folks. No–it’s more like a board game. And Auntie Ev’s “mix everything together” sent me to JAIL without passing Go or collecting Two Hundred Dollars. With each new technique we learn and with each new method we master, there’s less and less of a chance of drawing the Go To Jail card, but there’s always a chance. Don’t let it slow you down, though. Learn from it and move on. I’ve learned a lot about plum puddings (probably more than I ever wanted to know). And I’ve learned that, while I could serve my first attempt to almost anybody else in the Universe and have them say, “Oh, my! How delightful,” that wouldn’t hold true for my family. Because what I’m making isn’t just food. It’s a memory. Just call me The Piano Man.