Home » Chocolate Recipes » Pumpkin Cheesecake Brownies: When Road Kill is the Main Course, the Dessert Better Be Ready to Carry the Meal 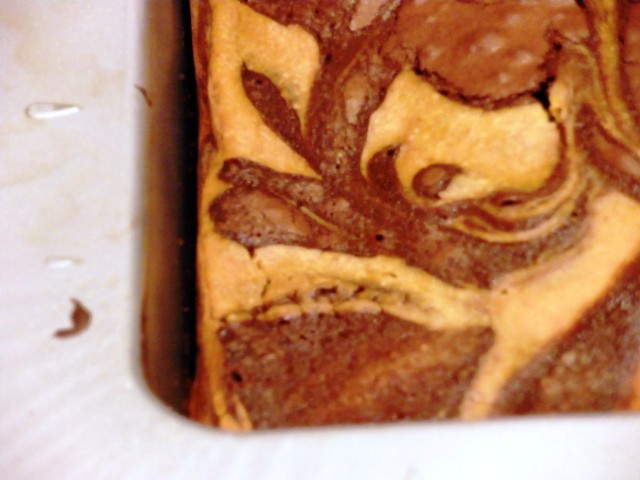 So, friend Thomas asked me last week if I’d make something for him to take to his work’s Thanksgiving Pot Luck Deal. I said sure, and asked him what he wanted me to make. His answer? Whatever. Something heart clogging and pastry-like. Gee–I guess I should be flattered that he thought of me in conjunction with that list of criteria.

Anyway, I called friend Roberta, Thomas’s espoused, and told her that her husband was useless. She concurred and then said she had no idea what he had in mind. I had just made those amazing brownies a few days ago, so I told her that I’d make pumpkin cheesecake swirlie brownies. She said that sounded Awesome, and that was that.

Then, later on, she sent me an email with “Useless” in the subject line. Regarding You Know Who. Obviously. She wrote that he was apparently Losing Sleep because he didn’t know how many brownies I was going to make. I told her six and that he’d like it. But I was kidding. I rolled my eyes and told them to expect a standard 9″x12″ pan o’ brownies.

I talked to the Man himself yesterday, late afternoon, when he wandered over to pick up the brownies. Which weren’t ready yet. They were still a dream in my Mind’s Eye. I told him that I’d deliver them that evening so he could present the Freshest and Most Awesome brownies ever. He said that he works with a diverse crew of folks, and that on the list of “Whatcha Gonna Bring?” three–count them, THREE–people had written Road Kill.

My thoughts exactly. I figure they’ll be dining on opossum and perhaps some squirrels and maybe a deer or two with suspicious tread marks on it.

And now, you guys, too, will be able to outshine your coworkers’ Thanksgiving Offerings with Aplomb. And Apumpkin. Here it is, the Thanksgiving Pot Luck Dessert that rises above the surrounding Tupperware-Encased specimens and the cracked crock pots full of evil-looking simmering Wombat Stew. It shines like a great chocolate and pumpkin shaped beacon of desserty goodness. By its very presence, it elevates the other dishes and makes hearts sing. Without further ado, I give you Autumnal Pumpkin Cheesecake Swirlie Brownies. Behold: 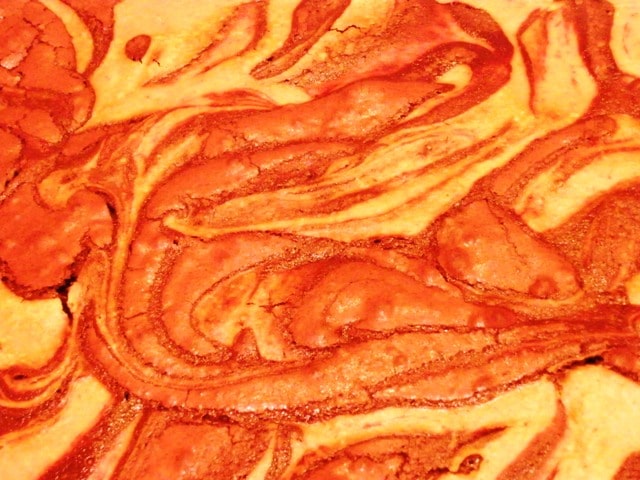 For the pumpkin cheesecake Portion

How to Get Ready to make them

How to Actually Make Them
*pretend that all these rules end with “scrape the bowl.”

Make the cheesecake mixture in another mixer, w/a hand mixer, or just in a bowl with a whisk. That’s what I did, even though I knew it would make my other mixer jealous. I just refused to look at him.

I think I’ve done a Disservice to these guys in comparing them to Armadillo. These are in an entirely different league. A league armadillos only dream of being in. Enjoy, and have a lovely day!

PS:  Update! Click here to read the Rest of the Story.