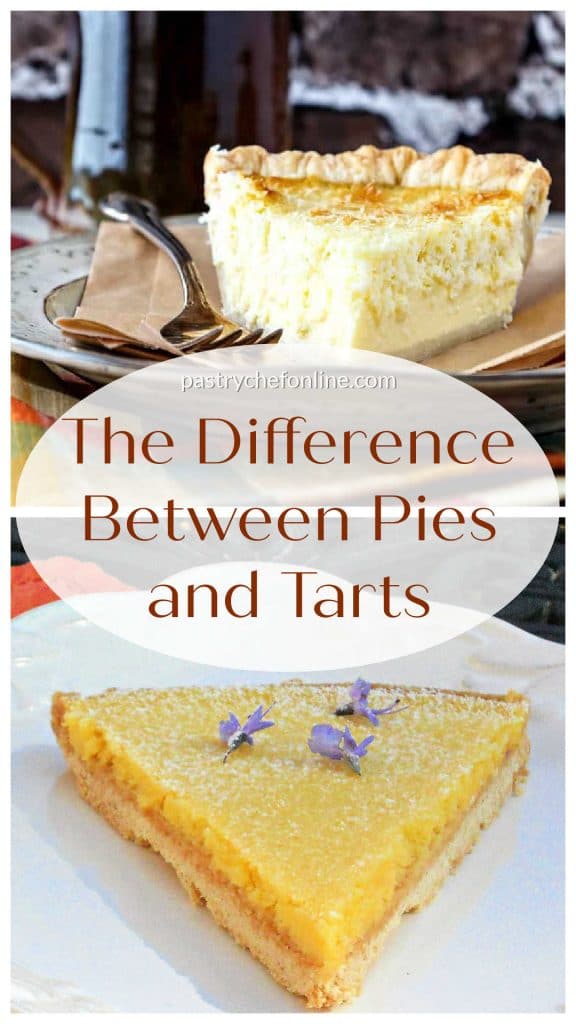 Hello, friends! Today, we’re going to talk about the differences and similarities between pies and tarts including the differences between tart crust and pie crust, what makes a tart a tart and a pie a pie, making pies in tart pans or tarts in pie pans and more.

I also invite you to check out my pies and tarts category so you can put what you learn here about what makes a pie a pie, and what makes a tart a tart into action. Thanks for stopping by!

According to Merriam Webster, an American dictionary, here’s what we’re dealing with.

Definition of pie: a dessert consisting of a filling (as of fruit or custard) in a pastry shell or topped with pastry or both; a meat dish baked with biscuit or pastry crust

The Oxford Learner’s Dictionary (The Oxford English Dictionary is only available through libraries and schools/universities) definitions are as follows:

Pie: a baked dish of fruit or meat and/or vegetables with pastry on the bottom, sides and top
Tart: an open pie filled with sweet food such as fruit

I consulted with my good friend and cookbook author, Jamie Schler, to get the French definitions. She has lived in France since the 1980s and is married to a Frenchman. Thanks for all your help, Jamie!

Here’s where it gets interesting. Or more interesting. In France, there is no word for what Americans think of as “pie.”

In French, the word pie refers either animal coloring (as in piebald) or a bird (as in magpie).

In French, there are two words for similar foods with crusts: tarte and tourte.

A tarte can be sweet or savory, has no sides–so just built on a disc of pastry–or short sides, and no top crust. The term “tarte d l’anglais,” or “English Tarte” is more along the lines of what we’d consider pie: a deeper pastry with a sweet or savory filling enclosed with a pastry top.

A tourte is also thicker with a top and bottom crust, so I guess in France, a tourte is similar to an American pie, although the connotation is generally that an American pie is sweet and a French tourte is savory (see French Canadian tourtière, or meat pie)

What They Had to Say in Culinary School

So, what exactly is the difference between a pie and a tart?

This was one of a handful of burning questions that I took with me on my first day of culinary school. On pie v tart lecture day, I craned eagerly forward, waiting for the answer to this pastry mystery.

Gotta tell you, folks–I was in for a bit of a let-down. Turns out, the explanation was….murky.

Here’s how it went down:  “Tarts have short, thick-ish, straight sides. Pies have deeper, thinner, slightly sloped sides. Tart pans look different than pie pans.” This is where I began some serious internal muttering.

“Pies have flaky crusts, but not all the time. Tarts have sandy, crumbly crusts. Usually. Tarts don’t have a top crust. Pies either do, or they don’t.” Seriously?!

“Tart crust tastes better than pie crust because it’s an integral part of the dish. The pie crust is just there to hold the filling. Since tarts don’t have a top crust, the fillings are beautifully arranged. Sometimes pies are pretty.” Are you kidding me?!

“Since tarts have a higher crust to filling ratio, tart fillings are often richer than pie fillings. But not necessarily. And there are always exceptions to any rule. And, why is your face so red, Ms. Field?”

The good news is:  I neither lunged over the table at her nor cursed exceptionally loudly. The bad news is: I needed more structure than that! I still didn’t know the difference between a pie and a tart after a whole class about it!! Deep breaths….deeeep breaths……..And now, after YEARS of therapy, I have settled down quite a bit.

A Matter of Degree

Since there are no hard and fast rules, other than height, my therapist helped me to I see the difference between the two as more of a qualitative one. I also approach it from an American point of view. You know, cuz that’s where I’m from and all.

Sometimes, You Have to Go with Your Gut

To me, tarts feel a little more elegant than pies.

Most pies are homey and comforting, but often good old American pies are all about excess.

How many bananas can I cram into that pie? How high can I swirl that meringue? Peanut butter and chocolate and marshmallow cream and toffee pieces? Awesome!

American big-ass fruit and cream pies are the Hummers of the pastry world. Bigger and richer than they have any right to be, and unapologetic about it.

Tarts are European sports cars: the perfect marriage of form and function delivered in a relatively small, precision package.

Tart dough is rich, sandy and flavorful, and the fillings are generally made to complement or contrast with the crust nicely.

For dessert (sweet) tarts, there are traditionally two types of dough for the crust: either a sable dough, which is sort of like a cookie crust–crumbly and firm, generally sweetened and containing egg.

The other option for a French tart dough is a round of puff pastry. In that case, the puff is not sweetened, so all the sweetness would come from the filling.

As an aside, old-school French tourtes (with sides), are constructed with a round of puff pastry for the base and a ring of puff pastry around the edges that bakes up to form sides.

American pie dough can be tasty, but it’s really more about texture than flavor with a pie crust. You either want it to not get soggy, or you want it to be flaky. Flavor is not the main thing–the Thing is that the crust is there in order to give the filling a home and to get the filling to your mouth.

I like to use a pate brisee for my pie crust. “Brisee” means “broken” in French, and I expect that refers to the butter that’s broken up or rubbed into the flour to make it flaky.

What do the French use this stuff for? I will find out and get back to you. There’s always something sneaking around to muddy the waters of what should be a straightforward discussion!

This version of American pie dough uses a combination of shortening and butter to make a crust that contains less water (shortening is 100% fat while butter is about 80-82% fat plus water and milk solids).

Can You Make a Tart with Pie Crust?

The short answer is yes.

There are a few things to consider: sable has more flavor than pie crust, so if you want the crust to add its own flavor to the dish, you may want to stick with tart dough.

Sable is also crumbly and sandy (sable is the French word for sand) so will provide a nice contrast to a smooth, creamy filling or to a stewed fruity filling.

You can just as easily use puff pastry and rely on all that glorious butter to add flavor.

Can You Make a Pie with Tart Dough?

While you certainly could make a pie with tart dough, I don’t think I would.

Tart dough really needs to be thicker to hold up, especially the sandy, crumbly sable dough. If you rolled it thinly enough to use as pie crust, I doubt it would hold together.

And using puff pastry to make a pie crust would most likely result in a weird ratio of filling to crust as the puff will puff from the sides in and from the bottom up, leaving not a lot of room for whatever filling you’re planning on using.

So, all in all, I’d say it’s a better plan to use pie crust to make a tart than it is to use tart dough to make a pie. Purchase Now
How & Why to Use a Kitchen Scale
This is an affiliate link which means I earn from qualifying purchases. Your price is unaffected.

While you’re here, I’d love it if you’d sign up for my newsletter. If you like the idea of me occasionally popping into your inbox, here’s how to make that happen:

Thanks for spending some time with me today as we mull the differences between pies and tarts. I hope you found the discussion and links helpful.