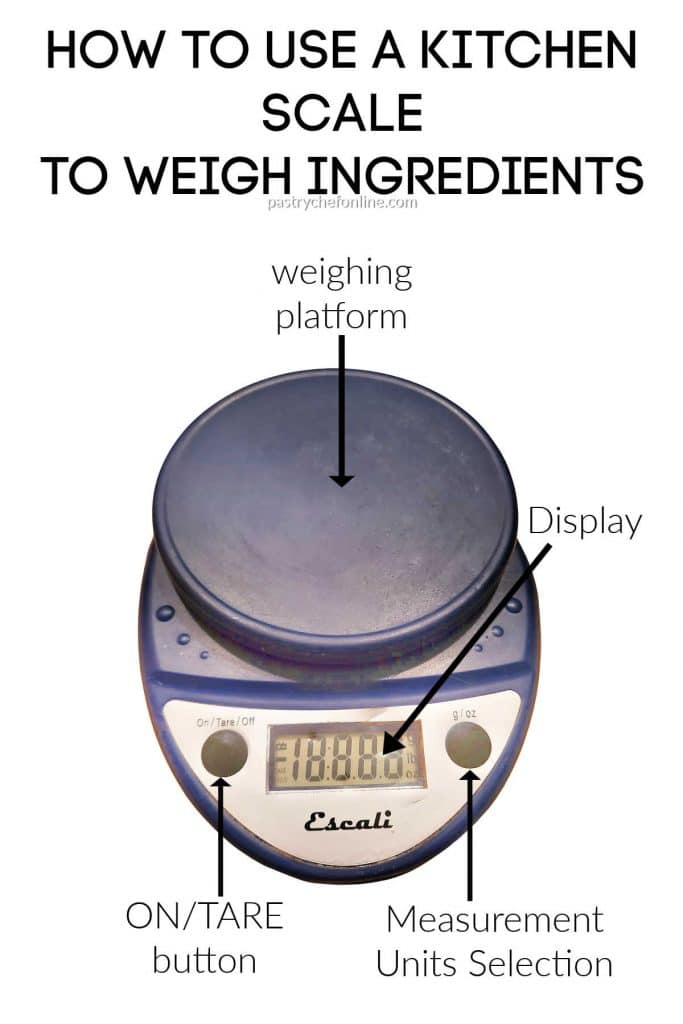 Hello, friends, and welcome to what may be one of the most important posts I’ve written. Today we’re talking about how to use a food scale, and more importantly, why to use one.

A kitchen scale is perhaps the most used piece of equipment I own, and I’ll tell you why, give you my recommendation for my favorite one, and teach you how to use it. So if you’ve ever wondered why people would ever bother to weigh their ingredients for a recipe, now you’ll know!

Thanks for being here as we explore using a kitchen scale!

See my how to use a kitchen scale web story here.

What You'll Find in This Post Click to view ToC
1 Balance Scales Vs Digital Scales
2 The Importance of Using a Scale
3 Confusion
4 Busting the Volume Measure Mentality
5 1 Cup Doesn’t Always Equal 8 Ounces
6 Weighing in Grams or Ounces
7 Do I Need to Weigh Small Amounts Like Teaspoons?
8 Parts of a Kitchen Scale
9 How to Use a Food Scale
10 How to Use a Food Scale
10.1 Materials
10.2 Tools
10.3 Instructions
10.4 Recommended Products

Friends, how to use a food scale is the most fundamental of fundamentals. And it’s something that the average home baker resists most mightily. I know; I was one of them.

The first day of culinary school, they set scales in front of us. And not those cute little glass ones you can get at Bed, Bath and Beyond, either. No, they were big old doctor’s office-looking balance scales with sets of weights and everything. Our heads collectively exploded.

Even though I got used to using the balance scale, it still kind of makes my head explode. Plus, they are expensive. (See that link above)

And they’re not super intuitive to use, either. I feel like I’m doing algebra when I have to replace a bunch of smaller weights with a bigger one and then add on more. Yuck.

A few weeks into culinary school though, our personal digital scales arrived. Nothing flashy. Nothing fancy. Just small plastic oval-shaped kitchen scales made by Escali. I still have that scale plus a matching friend for him.

The Importance of Using a Scale

Like all of us in our initial baking class, you’re probably wondering “What’s the big deal about using a scale?”

Here’s the thing. Measuring cups are made to hold a certain amount of Stuff. Once the measure is full, you level it off, and you’re done.

When we use measuring cups to measure, we’re measuring volume or how much room something takes up.

Now, pour each of those cups of Stuff onto a scale. Each one will weigh a different amount. Even though each ingredient took up the same amount of room (8 ounces of room, since there are 8 ounces of volume in a measuring cup), since different ingredients have different densities and some can be packed down, their weights will all be different.

To illustrate the confusion, here’s a quoted comment from my friend Brandy’s fantastic Savory Simple blog in response to a post about Grain-Free Paleo Pizza Crust in which she gave measurements in both cups and ounces:

On the surface, it does seem confusing. If I may be so bold, I think this is how that commenter’s thought process went:

What Brandy’s instructions indicate is that, if you’re using a scale, you’ll need 4 ounces by weight of almond meal and 4.25 ounces, again by weight, of arrowroot.

And if you don’t have a scale, the best you’ll be able to do is use a one cup volume measuring cup and get pretty close.

It’s like that old riddle, “Which weighs more, a pound of feathers or a pound of bricks?” The answer is that they weigh the same: one pound.

Volumetrically though, the feathers will occupy a ton more space since they weigh so much less than bricks. It takes lots of feathers to add up to one pound, but you’ll have to break a brick into six pieces to get a piece that weighs a pound (standard building bricks weigh about six pounds each).

Here’s what a friend posted on her Facebook page regarding measurements:

Hey folks! There’s often a bit of confusion when I specify ounce measurements next to cup measurements in a recipe. I think this is worth repeating periodically for those who are new to baking:

-1 cup of liquid = 8 fluid ounces.
-1 cup of dry ingredients does not = 8 ounces. It will vary depending on what the ingredient is. For example, 1 cup of bricks will weigh more than 1 cup of feathers. Make sense?

Liquid measurements are different than dry measurements. I highly recommend investing in a kitchen scale!

Now, this sort of post is music to my ears, because I have been preaching the gospel of weights lo these many years I’ve been lost and wandering in the wilderness. But, many people (especially in the US) only understand cup (Volume Measures).

Another commenter had this to say:

Glad you posted this different sites say different things. I guess flour, sugar butter would weigh the same? (THIS IS NOT TRUE)

I always use scales but thanks for the advice if I stick to 8oz = 1 cup for things like butter, flour, sugar it should be ok. How many fluid ounces in one cup? (THIS IS NOT TRUE)

I understand the confusion. Let me try to be very clear about weights and volumes:

For liquid measurements in fluid ounces, there are three ingredients where one cup equals 8 oz (or where 8 fluid ounces equals 8 ounces by weight):

The only culinary liquid ingredients that measure the same both by weight and by volume are whole milk, whole eggs (out of the shell), and water.

Weighing in Grams or Ounces

Since I’m from America, I tend to weigh ingredients–liquid or dry–using ounces. In almost every single one of my posts, I have a section that specifically lets folks know that they need to know how to use a food scale so they can follow my recipes and succeed.

Maybe I’m a stickler, but I’m willing to die on this hill, even in ounces.

As much as I hate to admit it, measuring in grams is more precise.

Here are some often-used conversions from grams to ounces/ounces to grams:

Whether your recipe is written in grams (which is always a measure of weight) or it is specified that everything is weighed in ounces (like most of my recipes), you can use the same scale. Just press the measurement selection button to toggle between pounds & ounces and grams.

Do I Need to Weigh Small Amounts Like Teaspoons?

I generally use measuring spoons for anything with a volume of less than 2 Tablepoons (roughly an ounce, if it’s a liquid).

Here are some common ingredients that are usually used in small amounts, so if you want to weigh them, you certainly can:

Parts of a Kitchen Scale

If you’ve never used a digital kitchen food scale before, it’s a pretty straightforward piece of equipment. While there will be some differences among brands and models, these are the basic parts that almost all scales will have in some form or other.

When scaling small portions, as for meatballs or cookies, place a piece of plastic wrap over your scale to keep it clean. Then you can measure directly on the weighing platform.

How to Use a Food Scale

Using a kitchen scale to weigh your ingredients is a straightforward process, once you get used to it.

Here’s how to do it.

To Weigh Multiple Ingredients Into the Same Bowl

To Scale Out Individual Portions

Thanks for hanging out with me for this admittedly very long post about how to weigh ingredients using a kitchen scale!