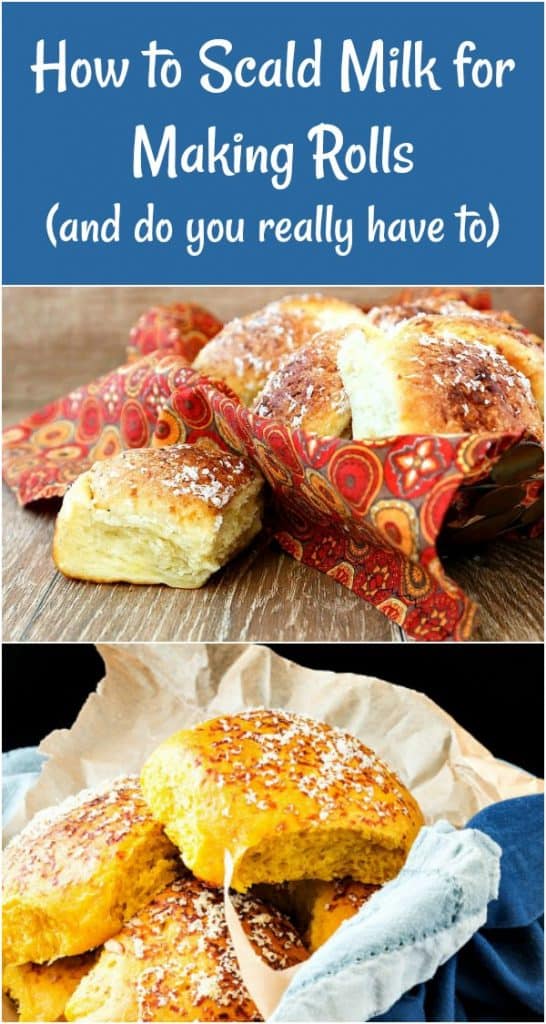 This is only Fundamental Friday post number three, and I am already so glad I started this series, because it seems like everyone has a request! Yay!

Today’s topic: What is Scalded Milk, How to to do it, and maybe even more importantly, why or even do I have to in the first place.

I wonder if you’re here because you want to make some soft dinner rolls?

Many older recipes for dinner rolls call for scalding milk. Read on to find out why, but first,

What You'll Find in This Post Click to view ToC
1 What Does It Mean to Scald Milk?
2 Pasteurization Changes Everything. Or Does It?
3 So, Do I Really Have to Scald Milk?
4 Do I Need Scalded Milk to Make Rolls?
5 What About Scalding Milk for Loaves of Bread?
6 Recipes for Soft Dinner Rolls
7 How to Scald Milk, Step by Step
8 Your Troubleshooting Guide
9 Have a Question for Me?

What Does It Mean to Scald Milk?

First of all, scalding is kind of a scary term. We think of molten coffee causing second and third degree burns. It was scalding hot. The child nearly scalded herself with the tea kettle. Scary stuff.

According to Dictionary.com, there are two main definitions of scald:

And that second definition is the one meant when folks talk about scalding milk.

Scald, as it relates to food (specifically dairy) is also a fairly old term. Back before Pasteurization, milk did have to be scalded to:

Pasteurization Changes Everything. Or Does It?

But, since nothing is ever simple, most Pasteurization processes involve holding the milk at a temperature that is below scalding temperature (180F) for certain periods of time.

For example, Organic Valley (love their half and half in my coffee!) Pasteurize their milk by holding it at 161F for 15 seconds, and this is 19F below scalding temperature.

It’s also 21 degrees above the temperature at which heated foods are deemed safe, so most likely, all bacteria are killed (they quote 99.9%) as well as the enzymes. And again, most likely the proteins have denatured enough to not mess with your yeast in your bread recipes.

Any dairy product that says “Ultra High Temperature Pasteurization” or UHT has been heated to a billion degrees. Oh, okay. Not a billion. 280F, actually.

Still, no respectable enzyme or bacteria would be able to withstand that amount of heat. Besides, that’s way over the scalding temperature, so using UHT dairy without scalding is probably fine.

So, Do I Really Have to Scald Milk?

I know I seem to be hemming and hawing a bit, using words and phrases like probably and most likely, but there’s also tradition to consider. And there’s also erring on the side of Extreme Caution.

In older books, at the time the recipes were written, the scalding really was necessary to kill off any nasty bacteria that might be lurking, to switch off the enzymes as well as denature the proteins that don’t play nicely with yeast.

But in newer recipes, it’s really more a matter of tradition as well as of expediency.

If you want your bread to rise faster, starting with warm liquid rather than cold is going to speed up your process since the overall dough temperature, and therefore that of the yeast, will be raised.

Next, caution. In all honesty, I never scald my milk before using it, and I’ve never run into any issues.

Still, if you want to make absolutely sure that you don’t have any bacteria or foreign yeast or something lurking in your milk, you have come to the right place to learn how to scald milk.

And if you’re making yogurt or cheese (like homemade paneer), scalding–and possibly even reducing the water content by holding it at higher temperatures so some of the water can evaporate–is necessary.

If you’re not dealing with cultures (yogurt, cheese, etc) and you are wondering whether or not to scald your milk before using, I’d say not to worry. But I’d also say that if you are worried, heat organic milk or any dairy that is traditionally Pasteurized (161F for 15 seconds) to the scalding point, or 180F.

Any milk or dairy that says UHT or “Ultra-Pasteurized” you can use as is.

If you want to warm it up a bit before using, that’s perfectly fine, too. You just don’t necessarily have to scald it.

Do I Need Scalded Milk to Make Rolls?

Many people find this post around the holidays. I expect it is partly because people bring out old family recipes for rolls, and the instructions call for scalded milk but don’t explain what it is or how to do it. So they go to Google and type in “how do I scald milk?” or “what is scalded milk,” or maybe “do I need to scald milk?” And you find me.

And I pretty much say no, you don’t have to scald your milk before making rolls. The Pasteurization process pretty much takes care of the three big reasons why they used to scald milk in the “old days:”

What About Scalding Milk for Loaves of Bread?

This could be because the cooled, scalded milk (warm milk, in other words) decreases the rising time, but there could be other reasons that I am just not sure of.

When it comes to food safety, there is no reason to scald your milk these days, but for a potentially higher rise with not much extra effort, go ahead and scald/cool before you mix up your dough.

I have a couple of excellent (if I do say so myself) recipes for Thanksgiving rolls, and I don’t scald the milk before making them. And they’re delicious. Give them a try. I think you’ll really like them!

It looks like I’ve talked about the why before the how. Sorry. Let’s do that now, shall we?

Way back at the beginning of the post, I talked a bit about why scalding is scary, and it’s mostly the connotation: Eeek! She scalded herself when the pasta pot fell over! Yikes, right?

But remember, when we talk about scalding milk, we mean to heat it to below the boiling point.

Granted, that’s still pretty hot, but since you don’t bring it to a boil, as long as you are watching it, nothing awful is going to happen. Honest.

How to Scald Milk, Step by Step

Here’s how to scald milk:

There you have it! The whys, there wherefores, a bit of science and the hows.

I hope you have found this helpful. And if you have a request for a Fundamental Friday post, do leave it in the comments.

Lots of the fundamentals live in my brain, but when dealing with specifics, I like to do some research so I make sure to give you good information. These are the sites I went to for fact checking:

Have a Question for Me?

Thanks so much for spending some time with me today. Have a wonderful day.