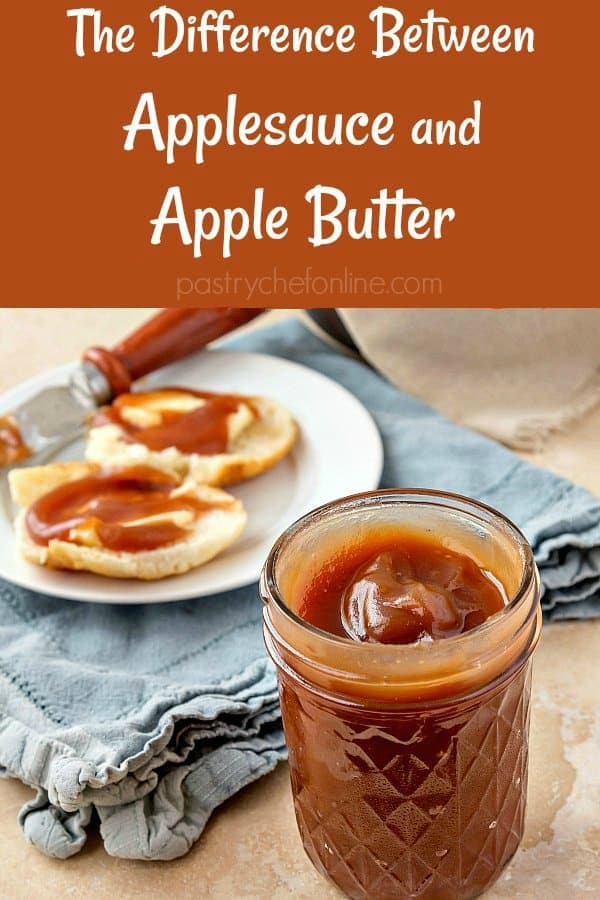 In this post, it’s my goal to answer all your burning questions about the difference between applesauce and apple butter.

As I was making apple butter for the second time in recent days, I wondered to myself, “What is the difference between applesauce and apple butter?” I figured if I was asking that question, maybe some of you were, too.

What Is the Difference Between Applesauce and Apple Butter?

I think it’s safe to say that applesauce and apple butter lie on a continuum of apple-ness, ranging from something like sliced apples floating in water on one end and apple pate de fruit on the other, where the appletensity cannot be topped.

Applesauce has plenty of flavor, but it lies more toward the watery/less cooked end of the continuum and generally consists of peeled (or not) and cored apples, maybe some water, maybe a bit of lemon juice, and maybe some sweetener. Occasionally a bit of spice.

The apples are cooked until soft at which point you either mash them up or puree them, depending on if you want a chunky or smooth sauce. The flavor is generally light and bright.

Is Apple Puree the Same as Applesauce?

The short answer is yes, apple puree (like baby food) and applesauce are the same.

The only difference is that apple puree is always, well…pureed…while applesauce is sometimes left chunky.

If you want to use apple puree to make apple flavored pate de fruits, then you need a specific kind of apple puree that is generally much less sweet than a traditional applesauce.

Then just cook until soft, run through a food mill, food processor, or blender.

Apple butter generally contains the same ingredients as applesauce, although often you don’t even core the apples for apple butter. Along with the usual suspects, there is almost always a mixture of spices.

Can You Make Apple Butter from Applesauce?

You can totally do this (although I would probably just start from scratch).

Take commercially produced (or your own) applesauce and turn it into a really lovely apple butter by adding some spices and cooking it down over low heat so the water evaporates and the apple flavor is intensified.

You also get some lovely caramelization which adds depth to the flavor and deepens the color.

How to Make Applesauce in a Slow Cooker

A standard recipe for slow cooker applesauce is apples, peeled (or not) and cored, water, and sugar. Maybe some spices. You cook this mixture until the apples are very soft, and then you mash them. The end. Voila apple sauce.

Here are some recipes for you:

Can You Make Apple Butter in a Slow Cooker?

A standard recipe for slow cooker apple butter is apples, peeled (or not), apple juice or cider, sweetener and spices. Cook this for several hours in the crock pot, pass through a food mill and then continue to cook in the slow cooker with the lid off for a couple of hours until some of the water evaporates and the flavor intensifies.

Here are some slow cooker apple butter recipes for you to take a look at.

The apples can be peeled or unpeeled, but they are (almost) always cored.

Applesauce can be chunky or smooth.

You really don’t need much more than a good paring knife, a heavy pot, and a potato masher to make applesauce or apple butter. But there are some tools that will make your apple loving heart happy and your apple peeling life a bit easier.

I’ve used one of those Johnny guys at the restaurant, and even though it looks a little gimmicky, it makes short work of peeling and slicing tons of apples. If you have fewer to go through, a press-down corer/slicer is great to have. I love my food mill for the perfect texture it gives both applesauce and apple butter, and an immersion blender works well–and quickly–for smoothing out your sauce.

Does Apple Butter Have Butter In It?

Apple butter does not contain butter. Just because you mix butter into applesauce doesn’t make it apple butter.

The “butter” refers to its spread-ability and smooth consistency, so I think it is safe to say that apple butter is always pureed.

Caramelization and the addition of spices does make apple butter more suitable for fall than apple sauce, both in flavor and in color, although there is no rule that says you can’t enjoy apple butter whenever you want. Or applesauce, for that matter.

Can You Make Apple Butter or Applesauce in a Pressure Cooker?

Yes, you can use your Instant Pot or other pressure cooker to make your apple-y treats. Note that since an Instant Pot will not let your applebutter reduce (since it’s under pressure and no liquid in the form of steam can escape) you will need to continue to cook your apple butter using the saute setting once you release the pressure.

Can You Add Other Fruit To Your Apple Butter?

Here are some fruits to consider:

As far as dessert components, I think the intensity of the apple flavor in apple butter stands up better in desserts or baked goods such as my Yeasted Chai Spice Apple Butter Coffee Cake.

Applesauce, on the other hand, can take the place of fat in baked goods since the mild apple flavor will take a back seat and will bring a lot of moisture without adding a very distinct flavor.

I think that pretty much covers apple butter vs applesauce. As I said at the beginning, aside from using apples, there aren’t a lot of absolutes in either applesauce or apple butter.

In short, I think the difference between the two is mainly a matter of degree of cooking.

Since apples are naturally pectin-rich, apple butter will set up into a soft jam or spread upon refrigeration.

Leaving the skins on, as well as the cores in, both help with that since that’s where most of the pectin lives.

Applesauce isn’t cooked long enough to concentrate the pectin and will maintain its loose sauciness even after cooling.

Thanks for spending some time with me today, friends! Take care, and have a lovely day.