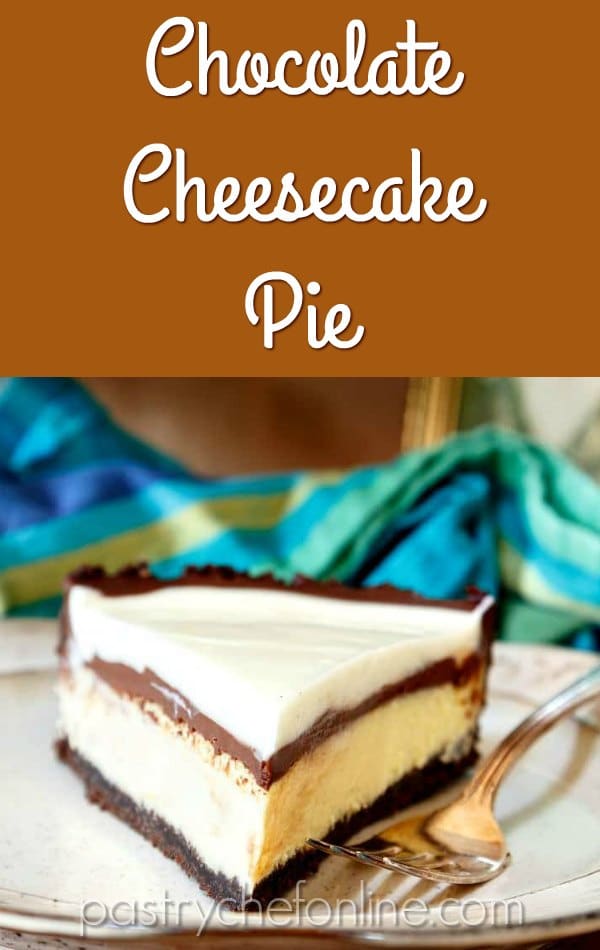 This chocolate cheesecake pie was my brother’s favorite pie, and he always requested it for his birthday dessert.

Read on to learn more about the wonderful person my brother Greg was and to get the recipe for his pie. It truly is delicious. Several people have contacted me to tell me they made it in his honor, and I am always so touched by these messages.

Enjoy this pie that is part cheesecake and part chocolate pie. And read about Greg, because as long as there are people to remember him and hear his story, he will live on.

My brother would have turned forty-six today. I am certain that he would still be living in Charlotte, so we would have driven over and had a wonderful meal with my mom and dad, him and his wife and kids. We’d have played with his dogs—he surely would have had two or three—and checked out his newest gadgets.

He would have worshiped at the Apple alter. Or maybe he would have been an Android guy. Google Glass? He’d have loved it. He would have had the newest, most bleeding edge technology that he could hunt down.

Greg never had the chance to be the wonderful father and husband that I know he would have been. My brother only lived to see thirty-one birthdays, and he was sick for the last three that we celebrated together.

Closure? Is There Such a Thing?

We grew up in a household where if you didn’t talk about the bad things and just pretended everything was copacetic, then things would be copacetic. We lived by The Law of Attraction’s more pessimistic cousins, The Laws of Selective Attention and Willful Ignorance.

All during Greg’s illness, we never discussed—or at least the two of us never discussed—the “what if you don’t make it” scenario. We hung out on Friday nights, watching movies and listening to Guns N Roses. To this day, I cannot hear Paradise City without thinking of my brother and the whiplash I used to give myself doing the Axel Shuffle, whipping my head around and belting into one of the handles of Greg’s nunchucks.

Even towards the end, when he no longer had the strength to tie his own shoes and his vision was deteriorating, we never had The Conversation.

Even when the head of the bone marrow transplant team stopped visiting him to see how he was doing because he was obviously going to be just another casualty along the road to better and more successful bone marrow transplants, a data point on a graph, we still talked about the future and ended every conversation with “I’ll talk to you tomorrow.”

Were we being optimistic, or were we intentionally avoiding what was looming? I think the latter. Part of me wishes that we had had some closure.

A frank discussion, an exchanging of I love yous and a chance to say how much I would miss him when he was gone.

I would like to have that conversation locked away in my memory so I could take it out on occasion and look at it in the light.

Just a short few months before he died, he bought a new car. We were all stunned and heartened by the apparent optimism that purchase signaled. His choice was between a sweet little BMW 325i and a Bonneville.

I scratched my head when he drove home the Bonneville, but once he was gone, it became obvious to me that he made his choice with my mom in mind. He must have known she wouldn’t have felt comfortable in the small BMW, so he bought her car and broke it in for her.

She still drives that Bonneville. I think she always will. (Mom now drives an Elantra. She kept the Bonneville for years and years, but she finally let it go.)

I Was a Sister. I Am a Sister.

Driving back to my parents’ house from the hospital on that last day, I remember so many good, Southern people were already at our house, chatting in hushed tones and waiting for us to come home so they could place aluminum foil-wrapped tins and trays into our hands along with the damp-eyed and heartfelt Oh we are so sorry’s.

I found myself in a conversation with a few folks in which we quietly debated which was worse: someone cut down in an instant, or someone who lingers and whose life slowly leaks out, like water from a rusted bucket. We decided that neither way was good.

I found out later that those people had no idea who I was. I was Greg’s sister for all of his 31 years. That is who I was.

That is still who I am, even after all this time.

The first few times I dreamed about my brother after he died, he had That Look about him. The simultaneously bloated and emaciated look of cancer patients on steroids. His hair was stubble. There was still a huge, sutured scar on one side of his head where the surgeons had gone in to try to understand why he was blind.

They never did find an obvious cause.

When I finally was able to dream past the shell of his illness and see Greg as he was before his diagnosis, I woke up smiling. And now, when I see him in dreams, he always looks as he did before I had to learn that BMT didn’t mean Behavior Management Technician but Bone Marrow Transplant.

The vocabulary of cancer is learned quickly, and while numb, but that is another story which has nothing to do with food for the body or for the soul.

My Brother, the Self-Taught Cook

He walked in, took a taste, rolling the thick red sauce around in his mouth as if he were a professional sommelier, and said, “It needs sugar.”

He was right, too.

We used to make elaborate, multi-course meals for mom and dad for Mother’s Day and Father’s Day. We’d go to the library and find exotic cookbooks and copy the recipes we wanted to make, and then we’d make them. He was the chef. I was his sous.

I always looked forward to his birthday dinners because I knew they would end with That Pie. Now that he is gone, if I’m going to be at Mom and Dad’s for my birthday and she asks me what I’d like for my birthday dessert, I always ask for Greg’s pie.

What do you want for your birthday dessert? Chocolate cheesecake pie. Always.

Today, I make this chocolate cheese pie in memory of Greg. Of his friendship and his kind, steady, gentle spirit. I love you, brother, and while I most often think about you with a smile, I will miss you for the rest of my life.

If you decide to make this chocolate cheesecake pie, I would love it if you’d let me know. Knowing people love and enjoy this recipe makes me so happy. Purchase Now
How & Why to Use a Kitchen Scale
This is an affiliate link which means I earn from qualifying purchases. Your price is unaffected.
Continue to Content

For the Sour Cream Topping

For the Fudge Sauce

For the Sour Cream Topping

I've done a bit of tinkering to the original pie. The original does not call for any espresso powder. It also calls for a vanilla wafer crust, half as much cheesecake filling, and a jar of fudge sauce for the fudgey part. Feel free to make this either way.

In the updated photos, I baked the pie in a 9" push pan, and it worked out beautifully. Think of it more as a shorter cheesecake than a pie. It works just as well in a deep dish pie pan. If you want to make it in a regular, shallow pie pan, make half as much cheesecake mixture and you should be fine.

Consider making this chocolate cheesecake pie in honor of someone you love. It is truly excellent. Greg did have impeccable taste.