#BreadBakers is a group of bread loving bakers who get together once a month to bake bread with a common ingredient or theme. Follow our Pinterest board right here. Links are also updated each month on this home page. We take turns hosting each month and choosing the theme/ingredient. If you are a food blogger and would like to join us, just send Stacy an email with your blog URL to [email protected].

When I love a flavor combination, I sort of go crazy. For awhile, everything I made was flavored with chocolate and orange. Another time, I was in a caramel phase and everything was caramel. And now I’m in my Cuban Sandwich Period. In order to use up some jerk-marinated pork tenderloin I cooked last week, I made Cuban sandwiches on store-bought Cuban bread. They were pretty delicious, but since tenderloin isn’t the best cut of meat for Cuban sandwiches, I decided to make a stuffed version of Cuban sandwiches for #BreadBakers this month using mojo-braised pork shoulder. I like the bread recipe itself so much that I’m going to make a plain old loaf of Cuban bread in a few days. And then I’ll make more Cuban sandwiches. It’s a vicious cycle. But since this month’s theme is Stuffed Breads, hosted by me, I stuffed all the Cuban sandwich fixin’s into my loaf of Cuban bread before baking. Then, I let the loaves cool and then pressed them between two hot cast iron pans since it’s not a Cuban sandwich unless it’s pressed. I tried stuffing the loaves two ways. For one loaf, I used large pieces of all the ingredients as I would if I were making a regular Cuban Sandwich. I loved the texture and the pop of the pickles in the finished bread, but it was a pain to seal up. Plus, some of the pork shoulder poked through the bread. For the other three loaves, I chopped up all the fillings–pork shoulder, ham, Swiss cheese and pickles–and then scattered a liberal amount over Dijon mustard spread out on the dough. Here, take a peek: 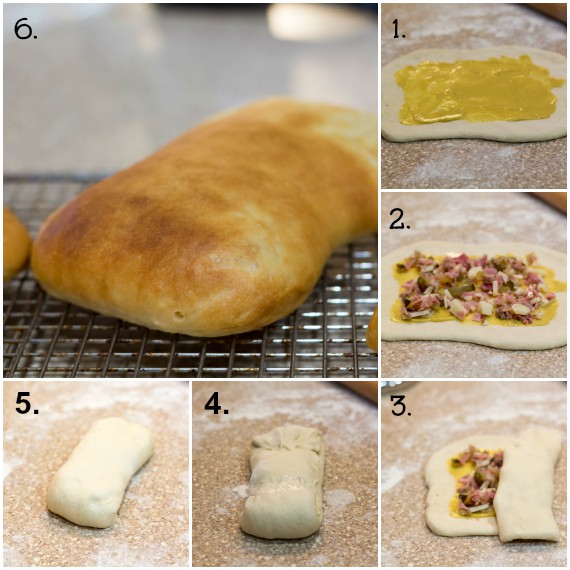 Then, all I had to do was roll them up sort of like cinnamon rolls, pinch and fold the ends using some water to make a tight seal and then turn them over again. These were much easier to work with than the first loaf I made with large pieces, but even though the flavor was there, I missed the texture of a “regular” Cuban sandwich. I just thought you should know so that when you make yours, you can decide which method you’d rather use. I made the first loaf sort of like a turnover and then had to figure out how to pinch and seal the slack dough. Rolling up chopped fillings was easier, but it’s a trade-off if one of your favorite things about a Cubano is the texture. 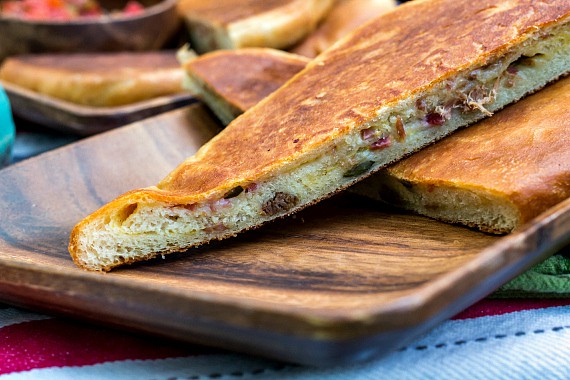 If you’d like to do your own thing, here are the base recipes I worked from.

If you’d like to make your Cuban bread the way I did with stuffings and all, read on and then do read all the other talented Bread Bakers’ posts. Our round-up this month is twenty-five strong. Nice!

For the Cuban Bread

For the Braised Pork

To Press and Enjoy

For the Cuban Bread

For the Braised Pork*

To Make the Filling**

To Press and Enjoy

*You can use Tyler's complete recipe, linked above in the post or you can just do what I did. I sort of followed his recipe and then took a couple of short cuts. I made mine in my pressure cooker in about 40 minutes. If you don't have a pressure cooker, use a slow cooker or Dutch oven and expect it to take a lot more times.


**If you decide not to chop your filling ingredients, layer them on half of the dough like you would make a "regular" sandwich, leaving an inch of space all around. Wet the plain edge and fold over the other side of the dough, pinching the seams well and trying to make as neat a package as you can. You will definitely have more filling in this style, but it will be a bit harder to deal with shaping. If you go this route, you will probably need to double the amounts of all the filling ingredients.

Now, feast your eyes, and get ready to bookmark these babies!

Stuffed Breads from the Bread Bakers

Thank you so much for taking the time to read today and for visiting all the Bread Bakers. We work hard to stretch ourselves and try out new ideas and recipes to share with you, and we truly hope you enjoy them. Take care, and have a lovely day.