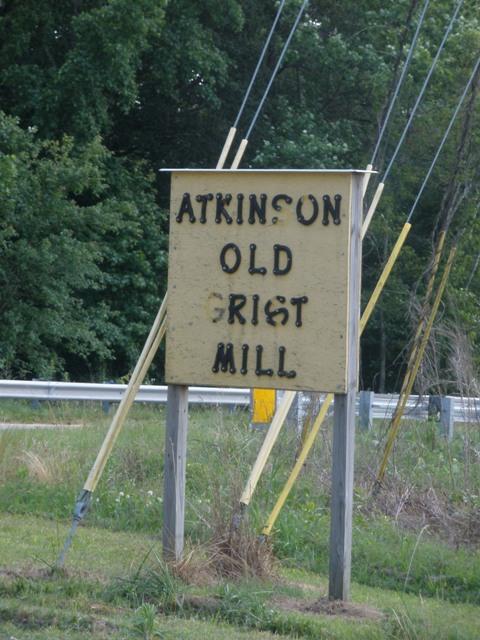 Yeah, not for show. This is the real deal, folks.

Two things made me well up with joy this weekend. Seriously. One of the Things happened on Saturday, and one of them happened Sunday.

I will tell you about the Sunday Thing very briefly. Best Carnitas Ever. If you’re in the Triangle area of NC, you really need to check out Las Margaritas on Timber Dr (now sadly defunct. 🙁 ).

On to the Saturday Thing. About three weeks ago, the Welcome Wagon lady came to see us. It’s not called Welcome Wagon anymore, but still, she did have a wagon. So there you go. Anyway, one of the Treats she brought us was a map called America’s Main Street:  Not-To-Be-Missed Stops Along North Carolina’s I-95 Corridor. We focused on those Attractions that were in Johnston County, because it’s right next door to Wake County, where we live. The Attraction that immediately leapt out at us was Atkinson Milling Company/Exit 97. Here’s the entry:  “Bult in 1757, this mill has been in continuous operation for more than 240 years. Today, Atkinson’s Mill is the only water-powered gristmill operating in the area.” Just try and tell me that doesn’t sound like The Coolest.

So, we went, expecting to see a wee picturesque mill with a bunch of cute burlap bags o’ grits and such for sale next to the Moonshine Jelly and the Bone Suckin’ Sauce. Nope. This is a Serious Operation. There were all sorts of grain storage bins and Official Looking Machinery and buildings. Atkinson’s Mill is not in operation to cater to tourists, although they do have a small retail shop in the office; they are in business to make the best corn-based products that they can. I tasted some hushpuppy mix straight out of the mill and still warm from friction…….mmmmm………….hushpuppies…..Oh, sorry. I drifted off for a moment there.

Like I said, we drove up into the Johnston County version of a Serious Operation. We didn’t see anyone; we didn’t see signs saying, “come on in, ” so I called them up from the parking lot and said that we were here and were Unsure of How to Proceed. The man who answered said that he was there, too (ha!) and to come to the trailer marked Office and he would let us in. And that’s how we met Ray Wheeler, owner and operator of the mill since 1971, who came to work there with his wife in 1958. Ray Wheeler holds the official North Carolina trademark for and is known in restaurants and stores far and wide as “The Cornbread Man.” He is smart and shrewd and funny and knows everything there is to know about cornmeal and milling.

I’m sure there are many people all over the place who own and operate mills, but the cool thing about Ray is that he decided to write a book about his love affair with his “old 250 year old grist mill.” More on that in a moment. Ray told us a bit about the history of the mill, and then he called down to the Mill Proper to get his son to give us a tour of the actual workings. Fascinating stuff. Did you know that a mill stone lasts about 75 years? Nope, me neither. I also learned that they engineer a lot of things on the fly. There’s not a great market for parts for grist mills, so the Wheelers just make what they need, often coming up with solutions on a trial and error basis. The bearings for the mill stones are leather. Leather! The metal ones would get ground up and spit out in about a week. They learned through experimentation that leather bearings hold up for a year. They tried wooden covers for the stones, but they would rot. They tried metal covers, but they would rust. Now, they use plastic.

This is living history at its finest. But this place isn’t just a time capsule. This is a thriving, modern company that employs over 60 workers. They aren’t just doing things “the old way” as part of an Historical Exhibition. They are doing it because they think it’s the best way. And I think they’re right.

Okay, back to the book. I’ve read every word. Some of them twice. It is written with the voice of every farmer who tried to make a living in the early to mid 20th century in Eastern North Carolina. It is written in the vernacular, which I happen to love. The Eastern NC accent is colorful, musical and fast, and I love hearing it and seeing it written on the page. The Cornbread Man talks a little about his grandparents and his parents. Then, he talks with pure joy of his 53-year-old (and still going strong) marriage to Betty. He talks of how he came to work at the mill, to buy it and to eventually build a secure future for his family.

I have to give you just a taste of this book. I can’t help myself. Here’s a bit from the introduction:

As I said at the beginning of this introduction I wanted to tell my great grandchildren about their ancestors and what they went through to make a living and all their hardships and their disappointments and their successes. But out of all the hardships we old folks went through, I have come to the conclusion that as bad as we thought those hardships were at that time in our lives, they were really small bumps in the whole scheme of life. What I have found, by looking at the total life of each family that I have written about is that the love in that family overshadows every hardship and disagreement they ever had. Each family really had a great love affair and this book has turned out to my surprise to be more about love than I ever expected. —The True Life Story of The Cornbread Man, p 4

I laid down the cigarettes and the strong drinks many years ago now. When you see a person that never adjusts their wild lifestyle as they get older, they ususally have to endure their friends doing that slow walking and sad singing much too early in their life. —The True Life Story of The Cornbread Man, p 44

[Granddaddy] kept me busy doing things for him such as opening his beer and it seemed like every 10 minutes he wanted me to count all the money he could drag out of his pocket, which was probably less than two dollars in change. I didn’t know until years later why that money had to be counted so often. He told my daddy that I had counted his money a thousand times and never took one penny of it. I didn’t know at the time that he was testing me for honesty. –p 6-7

When a person can’t find anything but negative things to say about their spouse, they have not looked very deep into their marriage or they just need to be in the frame of mind to be able to garner praise and sympathy for themselves from their friends. I think most spouses that are always saying “poor me,” should stop for a minute and count up all the good things about their marriage and they may find that they have had a big long love affair and had not noticed. –p 10

Through this little book, we learned about the Wheeler family and about Atkinson’s Mill, but in more general terms, we also learned about how folks lived in the rural south, barely making a living on a rented farm. We learned about trust and values and family and community. And we learned it, not from a dry history text, but from a man who was born into and raised up living those ideals. Not that he was a saint, of course. He warned us that his wife thinks that some of “that book is pure pornography!” The Beloved is especially thrilled to have what amounts to an oral history, what with his academic roots in Public History. He perked up like Studs Terkel when Ray told us he’d written a book.

And, yes, of course we Purchased some Items. I chose a fine cornmeal and The Beloved chose grits. Very soon, I will be making Some Treats with these products, but for now, I just wanted to post about the mill. Guys, if you are ever in this area, make it a point to get by Atkinson Milling. Oh, and buy the book. You’ll be glad you did. 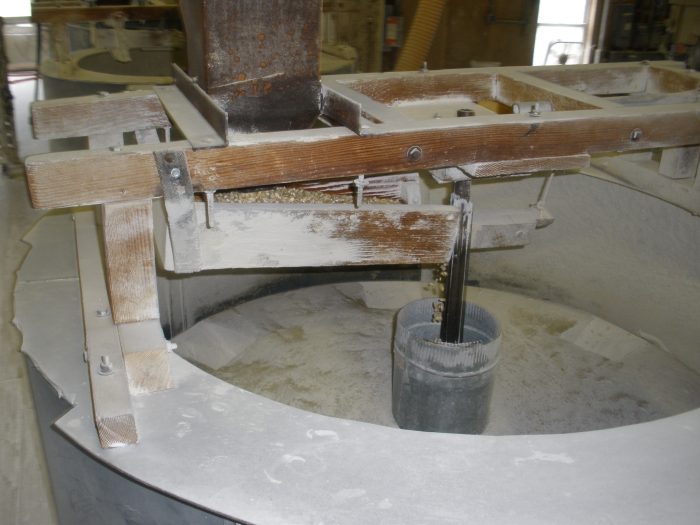 It’s all gravity fed, and each set up is configured a little differently. That’s how it goes when it’s all engineered in house. And see the plastic cover around the top of the deal? See–not wood, not metal. I have just one word for you. Plastic. 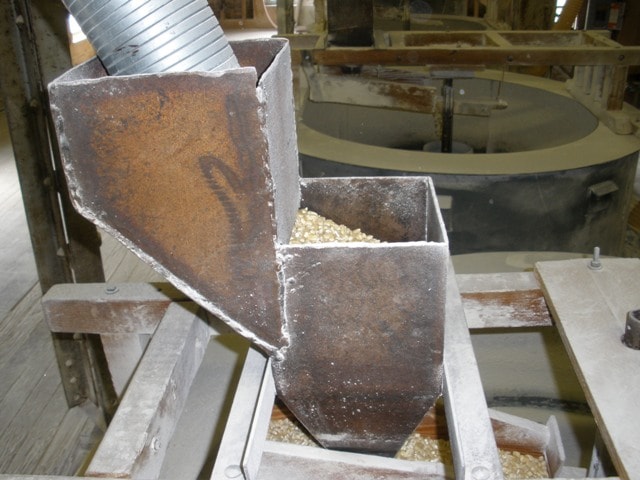 Here’s another view of the corn as it travels down all its shoots to get to the mill stones. 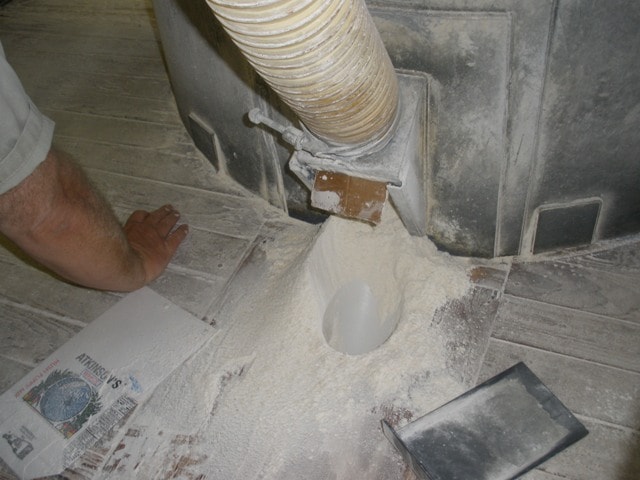 There’s that hushpuppy mix I was talking about. It goes through the hole there in the floor and shoots into a bin down below. 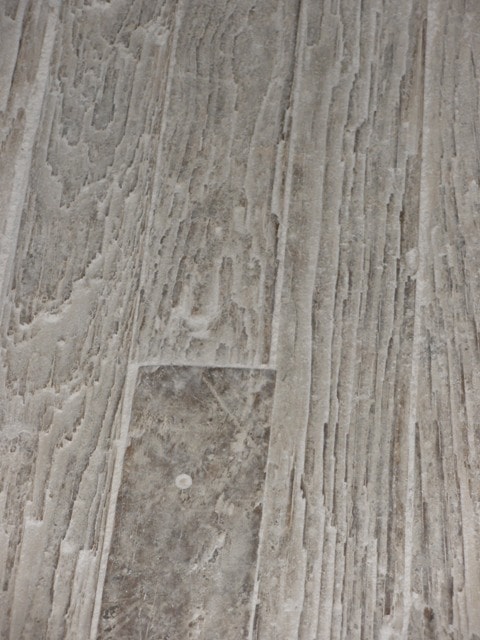 The floor is covered with fine corn dust and history. 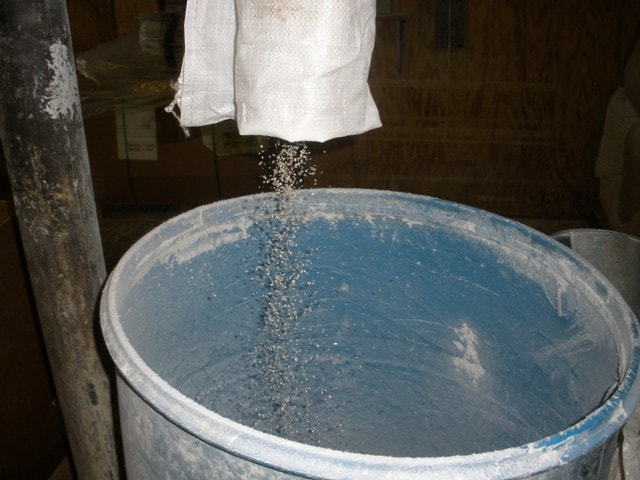 This is the outside of the corn kernels. It gets blown off and sold to add to chicken feed. 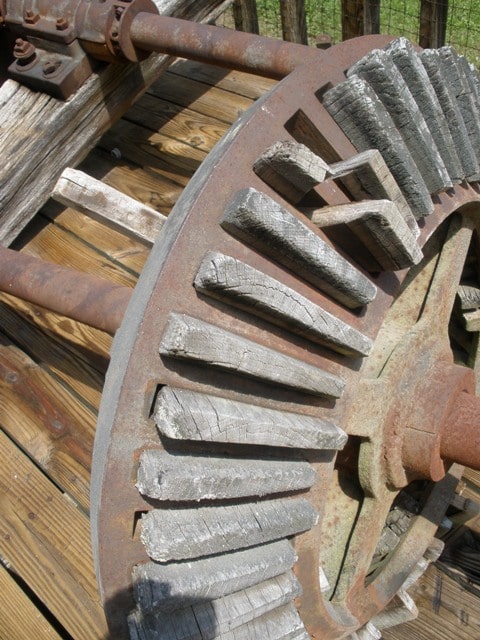 The teeth in the old gears were made of wood! 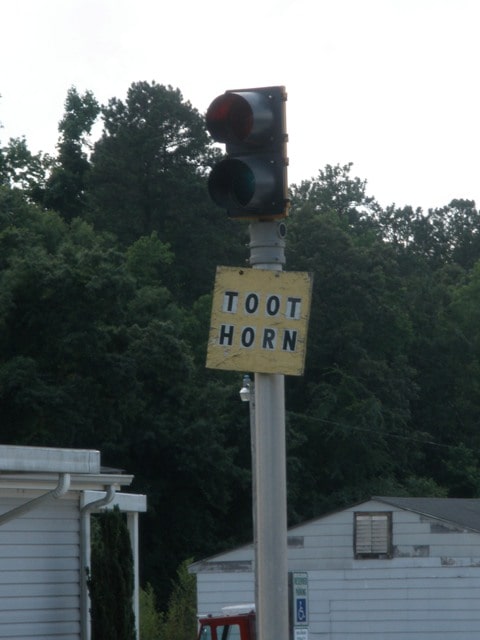 This sign is for the guys bringing in truck loads of corn to make sure that someone meets them out front. We did not toot our horn, because we figured it didn’t mean Us.