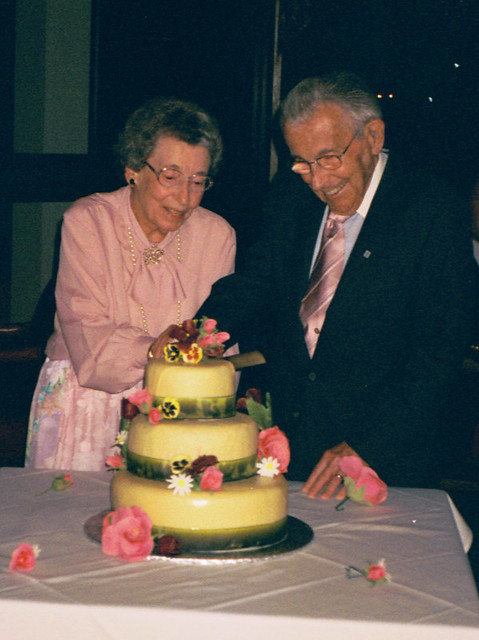 Every family has a member who acts as the binder, who keeps us all together and makes us better people just by their mere presence. Whose essence wraps us all up in love and makes a group of disparate personalities into a family. Our family’s binder has always been Auntie Ev. Her binding magic was such that it transcended blood ties and went straight to heart ties. You see, there is no blood relation between her family and mine. We have chosen to be family, and thus it is so.

Our families are woven together by many, many threads dating back to the 1930s. Now, we are so tightly bound that we might as well be related by blood. I think maybe The Universe knew that we all belonged together and orchestrated seemingly serendipitous events that thrust us all together again and again. And then, to make sure it stuck, It sent us Auntie Ev.

This will be our first Christmas without our beloved Auntie Ev. She left us in March after a long decline that was undoubtedly more painful for us than it was for her. It was as if something or someone was snipping the threads that bound her to this reality. I believe she gently floated up and away and now looks down (or out or up) on us all, even still our family’s binding force.

Auntie Ev was a fine, fine baker. And she was not one to shy away from baking in volume. She used to make dozens of lemon pound cakes for their church’s Good Friday Concert and bake/craft sale, the proceeds of which went to what is now the Muhlenberg Regional Medical Center in Plainfield, New Jersey. This was no small effort–this concert and the supporting events earned tens of thousands of dollars each year.

She baked at Christmastime like it was going out of style. Angel Slices, triple chews, butter cookies, date-nut pinwheels, Viennese rounds, light fruit cake and, the piece de resistance, plum pudding. Lots of plum pudding, because you never wanted to be caught without it.

For those of you not familiar with plum pudding, let me just settle one thing right now:  there are no plums in plum pudding. There aren’t even any prunes. I think that plum probably referred to the pudding’s being of the highest quality; the best. Plum is used as an adjective meaning “extremely desirable,” (so sayeth Dictionary.com), so, what she made was “Extremely Desirable Pudding.” Plum pudding sounds better.

Just like Boston brown bread, spotted dick or even haggis, a plum pudding is a steamed pudding. This means it’s cooked submerged, at least partway, in a lidded pot of boiling water. It’s my guess that steaming was a reliable way of cooking many dishes at a constant temperature. As long as the pudding is cooking in boiling water, the temperature remains 212F, give or take for elevation. So, in the days when the answer to “how hot is that fire?” was debatable, it was nice to be able to cook puddings at a constant temperature. Plus, the steam kept things nice and moist.

So, what makes this particular steamed pudding plum? Well, for starters, the part of milk is played by brandy. For seconds, you serve it with hard sauce, which contains butter, heavy cream, powdered sugar and brandy. And for Thirds, you Light It On Fire to serve. Pretty dang plum, if you ask me!

Since Auntie Ev is no longer here to make the plum pudding, she is watching over my shoulder as I make it for the first time. It’s a surprise for my Uncle Ray and Auntie ‘Leenie, Auntie Ev’s husband and sister (respectively!). I cannot wait to affix a jaunty sprig of holly to the pudding, pour brandy on it and light that puppy on fire, dim the lights and Present It while singing We Wish You a Merry Christmas. ‘Cause that’s how we do things in this family.

I know that neither Uncle Ray nor Auntie ‘Leenie thought they’d ever have plum pudding again, but I, with Auntie Ev’s help, am going to make sure that they enjoy a big old slice of it this Christmas. I even have Auntie Ev’s recipe, written in her own handwriting, courtesy of her son, Ken. 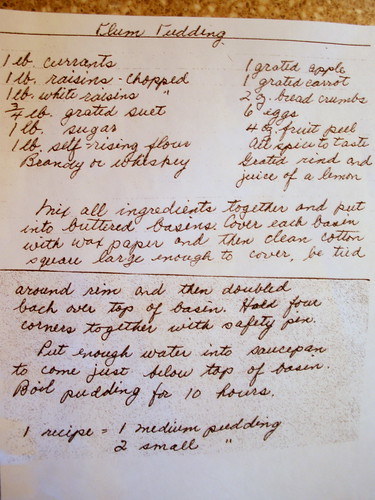 How can I go wrong?

Stay tuned for Part II tomorrow, but you’ll have to wait for Christmas to read about Part III. Wish me luck!

Part 2, Part 3, Plum Pudding Finale, The Story on The Story