I originally wrote this post back in 2009, back before anyone was making “naked cake,” or the new(ish) trend of barely skimming frosting onto a cake so the layers show through. Some naked cake only has frosting between the layers and none on the sides. I wrote this post to give you some quick ideas for frosting a cake rather than letting it be frosting-less. Tongue in cheek, you know? But now that naked cake is a Thing, I have actually made a couple, and I expect I may make more before the trend dries up.

Here are the naked cakes I’ve made so far, and I’ll be updating should I make more. 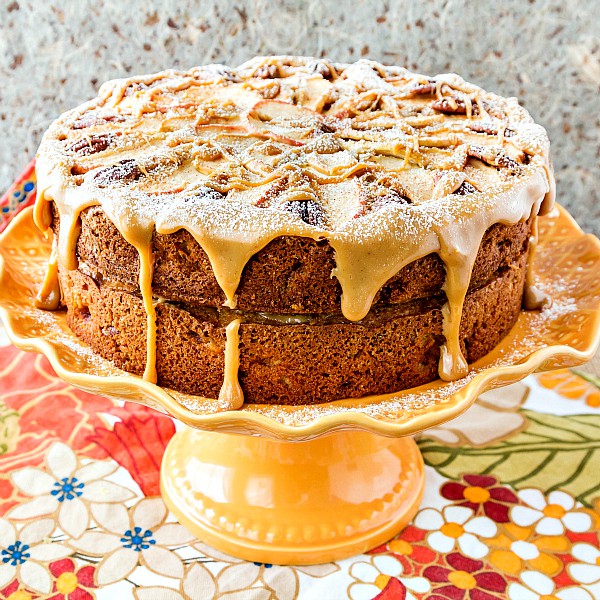 This naked cake is called Fresh and Dried Apple Pecan Cake. The sides are more or less completely naked except for some of the glaze dripping down the sides. That’s dulce de leche, by the way. It’s also the “glue” holding the layers together. I embellished the top layer of the cake with nuts and apple slices before baking. Moist, delicious, and striking!

This naked cake is all dressed up for Christmas. He’s called Vegan Chocolate Christmas Cake. The white frosting barely skimming the chocolate layers brings to mind a birch tree in the snow. Or at least it does to me. The cake is vegan, and there’s a link in the post for a non-vegan version. That one isn’t naked, but you can fix that, right? 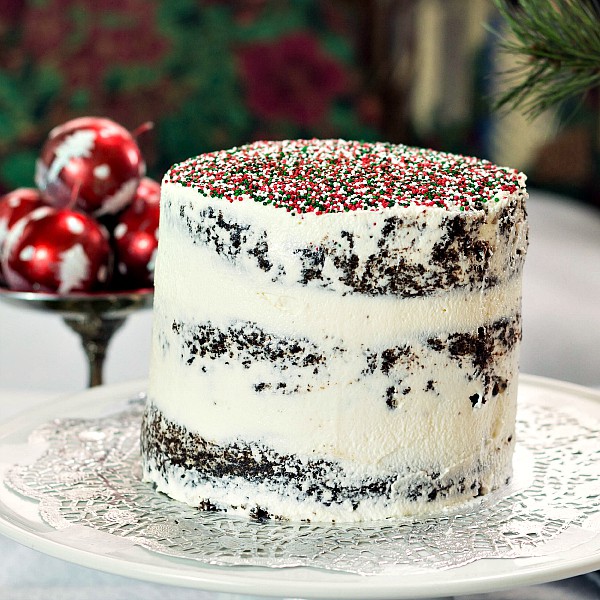 Sometimes I like a naked cake–a simple coffee cake, maybe a moist chocolate pound cake with a little confectioner’s sugar sifted on top, gingerbread–but most of the time, I like my layer cakes frosted. Not that standard layer cakes can’t stand on their own, mind you. It’s just that, well, I really like frosting and tend to think of most layer cakes as a way to get said frosting into my face.

Yesterday, I received a question about frostings. Let’s take a look, shall we?

I don’t usually dress my cakes, but on the occasions that I need to (birthdays), what would be a good frosting to use that would give me a smooth and firm enough surface to pipe words on, APART from buttercream which I dont like. I like the lightness of whipped cream, but it’s not firm nor smooth enough. (btw, if you can share how to make a stabilised whipped cream, i would appreciate it! I usually just toss in some icing sugar, read somewhere that it helps to prevent weeping).I don’t dress my cakes, partly because I cant think of what to use aside from buttercream.–Michaela

I emailed Michaela to see what she meant when she said “buttercream,” because that’s one of those slippery pastry terms that means different things to different people. She said that she doesn’t like the butter and confectioner’s sugar kind of buttercream, because the butter flavor is too strong. I love the flavor of butter, so this is an alien position for me, but I’m going to try to help anyway.

Here’s another thought:  Seven Minute Frosting, named thusly because you have to beat it for……Seven Minutes! This is basically a cooked meringue frosting. Some folks call it marshmallow frosting. You can, too, if you’d like. It has a very smooth, light mouth feel, and if I remember correctly from childhood, the outside will firm up on standing, making it pretty easy to pipe on, especially if you ice smoothly. Most folks swirl this frosting on with abandon because it’s poofy and lends itself to that. This recipe is based on one by that Queen of Butter and Mayonnaise, Paula Deen. Paula Deen scares me just a little bit, but that’s another story. And her frosting recipe is tasty. Here’s how you do it.

Put all of your ingredients in the top of a double boiler (or in a bowl that will fit down in one of your pans). Beat with a hand-held mixer for 1 minute. (Use the whip attachment). Then, place the bowl over a pan of boiling water, making sure the water doesn’t touch the bottom of the bowl. Beat continuously on high speed for seven minutes. Remove from heat, and beat in the vanilla. Spread on your cake right after making, because it will firm up on standing. (And before you say anything, I realize that, to call it Seven Minute Frosting, you have to ignore the first minute of beating. Either ignore it or call it Eight Minute Frosting. I care not).

I’m not going to address European-style buttercream here because, if Michaela doesn’t like the flavor of butter, I doubt she’ll like these frostings. If anyone else wants to know about them, let me know in the comments section.

Right, on to stabilized whipped cream. Cream is an emulsion of water and fat, and when we whip that emulsion into a foam, eventually some of the water will leak out. No fun. So, what we need to do is find something that will give the water something to do, so it doesn’t get bored and wander away. The best way I know to keep the water in cream occupied is to use gelatin. You’ll need 1/2 to 1 teaspoon of powdered gelatin per cup of cream, depending upon how firm you want your cream to be. Experiment with it a bit to see what your preference is.

Sprinkle the gelatin over the water, stir so all of the gelatin is wet, and then let it sit for about 10 minutes. You’ll know it’s ready when you have a solid block of gelatin staring at you. Take this block of gelatin and put it in a pan. Melt it over low heat, until it is completely clear and smooth. Cool to room temperature.

Whip the cream with a pinch of salt to soft peaks. While still whipping, drizzle the gelatin mixture in and whip really well to avoid getting little clumps of gelatin in your whipped cream. Whip in the sugar and vanilla (or other flavoring). Use this to fill and/or frost a cake. Of course, you’ll have to keep your cake refrigerated.

You can scale this recipe up with no problem, so make as much as you need. As an added bonus, this makes a nice, “light” dessert. Stir some jam or a little fruit puree–or even some chocolate sauce, into the cream, leaving streaks–you don’t want it completely homogenized. Then, let your creations set up in the fridge. You can call it “whipped panna cotta” if you want. Easy and yummy dessert. Not fat-free, but what are you gonna do?

So, Michaela, I hope this has helped. You guys know that I’m happy to answer questions, so please let me know if you have any burning pastry questions you want answered, and I’ll do my best. “I’m from the pastry department. I’m here to help.”