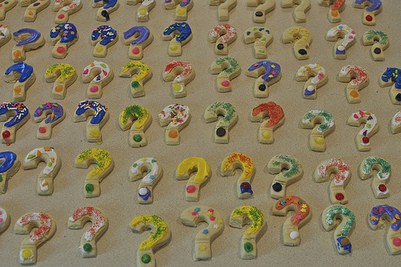 As promised, here is part 2 of the Question Answering Extravaganza. Today’s questions include one about sorghum, substitutes for egg whites in royal icing, different types of icings and how to keep cookies soft. So please, read on for my answers.

Can I use sorghum in place of honey in granola?? What does it taste like? Is it indigenous to NC?? This is another question I had to research as I know next to nothing about sorghum. Yes, you can substitute sorghum syrup for honey in granola at 1:1. I have never actually tasted sorghum, but from what I’ve read, it tastes a bit like honey with a touch of molasses in it. I read one description saying it tastes kind of like a Sugar Daddy. To me, that means that it has some caramel undertones and is very sweet.

Sorghum is actually indigenous to Africa, although it traveled from there to Asia, Europe and North America. Sorghum was a pretty widely distributed crop in the US back in the 1800s.

There are several types of sorghum. Most are raised for grain for animal feed, but some types, called sweet sorghum, are raised for the stalks. The stalks are crushed to extract the juice which is then boiled down into a sweet syrup. Today, most of the sorghum grown in the US is of the grain type–for animal feed and ethanol production. Most sweet sorghum is grown in the deep south, but the syrup is made in many states. The two states that produce the most sorghum syrup are Tennessee and Kentucky. I also found a website for Sandhill Farm, a farm that both grows sweet sorghum and makes sorghum syrup, located in Missouri.


What will be the substitute of egg whites powder in royal icing & What will be the substitute of glucose syrup & corn syrup? Royal icing is basically a thick mixture of powdered sugar and egg whites that is beaten slowly so as not to incorporate air. It is used for any decorations on cookies, cakes or other baked goods that you want to dry to a hard, matte finish. You can also use it to make piped flowers that are much sturdier than piped buttercream flowers. Royal icing can also be diluted a bit, often with lemon juice, to make an icing suitable for flooding the tops of cookies.

To eliminate the risk of salmonella, these days most people use meringue powder or powdered egg whites to make royal icing. It’s the whites (or the powdered whites) that allow the icing to dry so hard, so it’s a pretty necessary component. Now, having said that, you can make an icing that dries hard by just mixing powdered sugar and water or lemon juice together. I don’t think it would dry as hard or keep as indefinitely as royal icing, but is you are allergic to eggs, this might be the way to go.

Update on the royal icing question: Question Asker clarified that she cannot find powdered egg whites/meringue powder where she lives so she wanted to know how long royal icing would keep if made with “regular” egg whites. Here’s what I told her: “Old school” royal icing has always been made with fresh egg whites, and once it dries, between the moisture content being very low and the sugar content being very high, you should be safe for a Very Long Time. If you have any concerns about salmonella, try to find pasteurized eggs.

I’m not sure if the Question Asker wants to know about substituting glucose or corn syrup in royal icing, but in my experience, royal icing doesn’t contain either one. So, I’m guessing they want to know what else you can substitute for glucose or corn syrup. The next question I’d ask is “What do you want to substitute them in?” If you need a neutral invert sugar, those two are your best bet. If it’s okay for them to have some flavor, you could always try honey (although it’s very hygroscopic) or maybe Lyle’s Golden Syrup.

I’m not sure this was the most helpful answer in the world, but when the questions aren’t very specific, my answers can’t be, either.

The icing on cupcakes looks so much fluffier than what I used to make when my kids were little. Is there a new recipe? There are a ton of different icing varieties out there, some made commercially or by bakeries and some made at home. I don’t know what type of frosting that the Question Asker made when her kids were young, so I really can’t say for sure if it has changed. What I can do is give a run down of some of the more popular frostings used these days and you can try them out if you think they sound good.

I love soft cookies. Lately my cookies have spread thinner and cool into crunchy cookies. I wonder if butter has had more water added or??? Suggestions…BTW…I live in the Pacific NW and our Spring and early summer have been cool and rainy…I think the Question Asker mentions the weather because she Hypothesizes that the humidity has affected her cookies. She could be right, but it’s hard to say for sure unless she bakes another batch of the same kind of cookie on a warmer, dry day.

Butter in the United States has a fat content of 80-81%. The remaining 19-20% is made up of milk solids and water. It is possible that, if you switch brands of butter, you might be introducing a smidge more water to the recipe than you had before. I don’t think that it would be enough to mess up your cookies, though. For example, if the recipe calls for 4 oz butter (about 112 g) and 15% of that (16.8g or .6 oz) is water, and the recipe makes 24 cookies, you’re only looking at an additional .7 grams of water per cookie. With only .7grams of water per cookie, an extra 1% total water in the butter will have minimal impact (maybe .01%)  I vote that the Question Asker replace  a small amount of the butter with a 0 trans fats vegetable shortening. Since shortening is 100% fat, the total amount of water in the cookie will be reduced by 25%.

Another trick is to try chilling the dough. This will make the butter firmer initially so the cookies will spread less and have more of a chance of remaining soft.

And since this question kind of goes along with the cookie-shelf-life question from yesterday, I’ll repeat a part of that answer. Substituting a portion of the total sugar for a liquid, invert sugar can help preserve softness as well.

The question asker might also want to check the calibration of her oven. If the oven is baking a bit hotter than it used to, the butter may be melting faster and spreading more than in Days Past. Overbaking can certainly produce a crunchier cookie than One Might Like.


I’m still not through all of the questions, but I will get to all of them. Promise. If you have a question, feel free to leave it in the comments here and I will add it to the list.

Anyway, I hope this has been at least Somewhat Helpful to you. Thanks for reading, and have a lovely day.