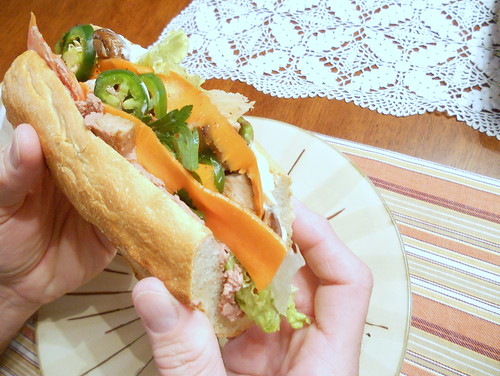 Bánh mì, like tagine, has two meanings. As a tagine is a cooking vessel and the name of a dish cooked in Said vessel, Bánh mì is both a Vietnamese take on a French baguette and a sandwich made on Said bread. French mayonnaise and liver pâté cozy up with Vietnamese cold cuts, vegetables and pickles. It’s fusion food, for sure.

Apparently, the airy quality of the bread is a huge component of the sandwich, and I couldn’t find a facsimile anywhere. I suppose I could’ve gone to a Vietnamese restaurant and bought a couple of baguettes off of them, but I thought a visit to Grand Asia Market–a 30,000 square foot Asian grocery carrying everything from curry to rice to quail eggs to tea to a keen pre-packaged snack called Happy Mouth that I came this close to buying–would score me a bánh mì or three. But alas, no. I whined on facebook and twitter that from now on, they shall be known as Adequate Asia Market. A Quick Witted twitter buddy suggested that I refer to them as Asia Minor, and so I shall.

At any rate, I bought an American version of a French baguette at a southern-based grocery chain and just went with it.

Now, before I get into the Ins and Outs of the Sammich, I want to take a hot minute to talk about eating locally. I mean, can anyone really expect to replicate the experience of eating a messy/drippy bánh mì on the street corners of Saigon in Garner, NC, home of 2011 American Idol Scotty McCreery? I think not. Nay, I know not. I mean, heck. We are now ordering our produce from a local farm; we buy happy meat from local ranches. Our eggs come from Across The Street. We grow a lot of our own herbs. The only stuff I don’t worry about sourcing locally pretty much is baking stuff–flour, sugar, baking powder, etc–and spices.

I live in North Carolina. I like calling North Carolina home. It’s home to sweet potatoes and corn. To Krispy Kreme and Cheerwine. To Lance crackers. To livermush and biscuits and gravy. To amazing, succulent barbecue that is as different on the coast as it is in the mountains as Cincinnati chili is different from Texas chili. And while we are fortunate enough to live in a culturally diverse area–thank you hospitals, universities and Research Triangle Park–and can find almost anything we could want (except for bánh mì at Asia Minor. Ahem), we’ve been eating more and more locally. And all of a sudden, I find it necessary to make an authentic Vietnamese street food. Really, Jenni? What is wrong with you?

Don’t get me wrong–it’s not like it wasn’t a great sandwich. It was. (More on that in a bit). It’s just that I should know better. Since we aren’t Vietnamese, the mise en place was ridiculous for this sandwich. What are staples in Vietnamese kitchens are exotics in mine, and it showed. The next time we make bánh mì, we’ll have no problem, but stocking up for the first one was kind of epic. More epicness than a sammy might deserve, if you want the Brutal Truth.

Enough of that. I see I’ve spent about 500 words on that little rant, so I shall move on to the Discussion of the sandwich In Question.

The Beloved and I were so excited when we chose this Recipe Inspiration. We have enjoyed every single Food52sday meal we’ve made, and this was no exception. Truly. It was just a lot of futzing about. We stayed almost completely true to the original, so I’m not going to post a recipe. Just go see monkeymom‘s fabulous original recipe. The only things we did differently were to add some marinated crimini mushrooms into the mix, just because I don’t like the idea of liver pâté on a sandwich without its good buddy mushrooms. In this, I took another cultural cue from the classic Beef Wellington, in which duxelles and liver pâté coat a lovely fillet. For my ‘shrooms, I quartered and marinated them in soy sauce, garlic rice wine vinegar, raw sugar, salt, white pepper and some fresh thyme.

The other changes I made were more stylistic. Rather than quartering or sixth-ing the radishes and carrots, I sliced them in long thin ribbons. Well, the carrots anyway. I sliced the radishes super-thinly too. I just thought they’d stay on the sandwich better that way while still providing some crunch and brightness. I was right. Yay me! 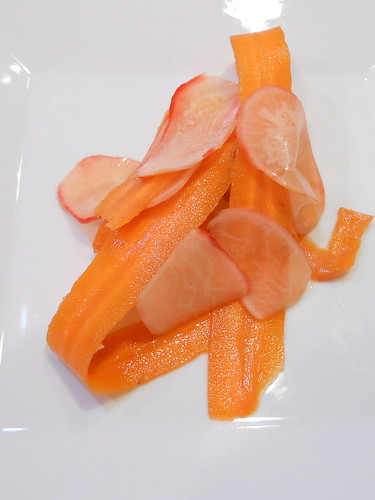 The last difference was that I chopped the meat after cooking it. I didn’t want to have to chew through large pieces of meat. And while some did fall out On Occasion, I did like the fact that it was all in bite-sized pieces.

Now, without further ado, here’s a story of Building a bánh mì in pictures. Enjoy! 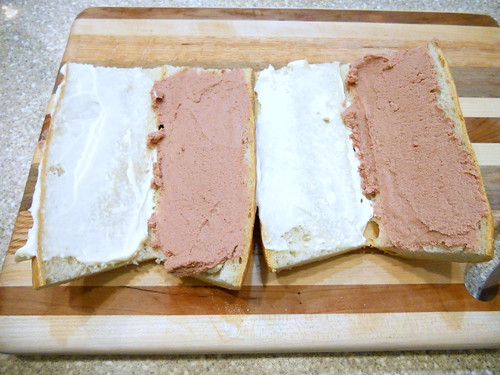 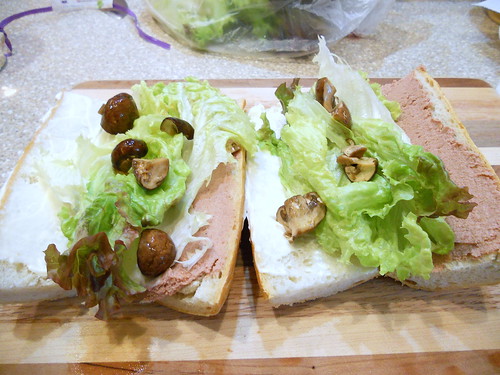 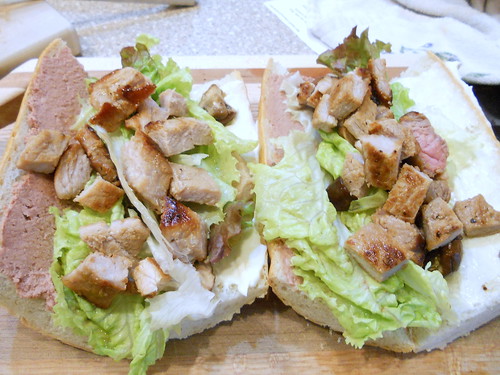 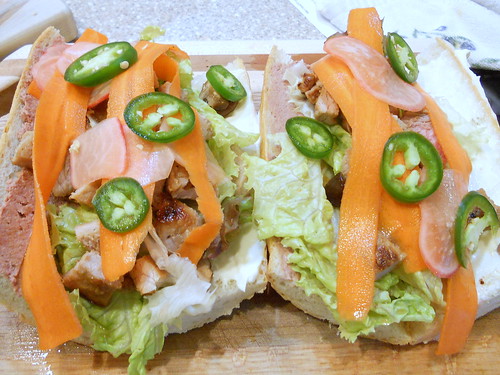 After that, the sammiches only needed a sprinkle of chopped cilantro and a little coaxing to close (thank you, tongs), and we dug in. I really do wish we had found light and airy rolls. The baguette we had was a bit chewy. Which is nice in some applications, but not in this one. The bread needed to take a back seat to the fillings, and the chew of the crumb made it a little too assertive. Nevertheless, we Ate Them Up Yum.

The flavors all worked very nicely together. I bow to Asian cooks for their masterful way with balancing flavor notes–sweet, salty, sour, bitter and savory. Everyone showed up to the party. The marinade and the pickles brought the sweet. The pickles also provided a salty/sour acidity. Savory came along with the pâté, the fish sauce and the pork and the cilantro provided a hint of lemony bitterness. Nice.

And that concludes today’s Food52sday/local food rant post. If you cooked along, please share your link below and/or over on the facebook page. Tune in on Tuesday, May 15 for the next recipe inspiration. Until then, have a lovely day.