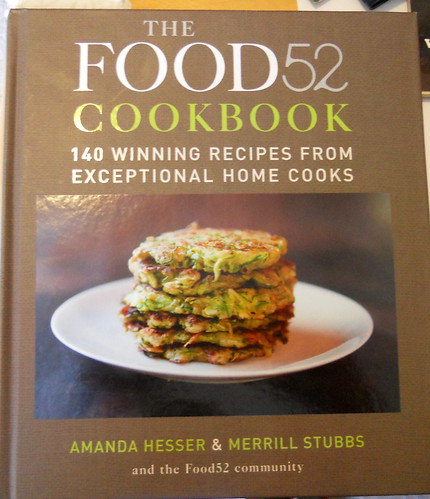 Oh, wait. You don’t know what Food 52sdays are? It’s a bi-weekly series that uses one of the recipes from The Food52 Cookbook for inspiration. I’ll post the inspiration recipe on a Tuesday, and then the following Tuesday, I’ll post what I made–whether I follow the recipe to the letter or just make a loose interpretation of it.

Readers and/or other bloggers are welcome and encouraged to participate. Tune in to find the recipe inspiration for that week and then post your own interpretation or iteration of the dish on the next Tuesday. You are welcome to post links to your posts in the comments section, and if I’m feeling kicky, I might even try to figure out that Linky thing so we can all link up. That’s a big step for me, though, so no promises!

Not only did The Beloved and I find a lot of recipe inspirations in The Food52 Cookbook, we also thought that most of them could be interpreted or reinterpreted in many new and interesting ways. This series will be based on the 21 recipes that we found most interesting/tasty sounding/unique/comforting in the first edition of the cookbook. We hope you’ll be inspired to join in, or at the very least to go cook and bake quietly in your own kitchen!

Thank you, Food52, for the inspiration. What a fantastic site!