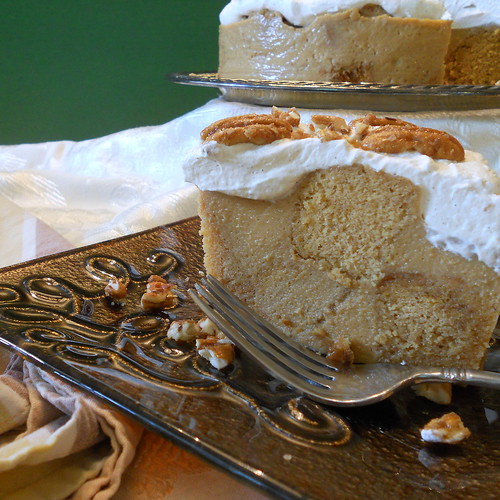 I love the play of the crumb against the custard, and I highly recommend a crunchy garnish. The pecans are a welcome addition.

Caramel + spice = Fall. It’s true. Ask anyone. So when the Recipe Inspiration for this week was called Faulknerian Family Spice Cake with Caramel Icing, I went straight to fall. Operation Thanksgiving, even.

I had initially planned to stick fairly close to the original recipe. And if you did, or you want to, go for it. It sounds fabulous. But since I’m me, I chose to Deviate just a bit. OK. I deviated a Lot. For a couple of reasons. First, Emily (original recipe sharer) said that the icing is A Bear, and I wasn’t feeling like Wrestling. Second, I wanted to use my Van Halen pound cake as a base recipe since it is really close to the proportions in Emily’s recipe. And then I started thinking, “Why not put some caramel in the cake, not just on top of it?” And that’s when I got my What-Turned-Out-To-Be-Brilliant idea to caramelize a portion of the amount of sugar called for and mix it with the dairy to add in alternately with the dry ingredients. 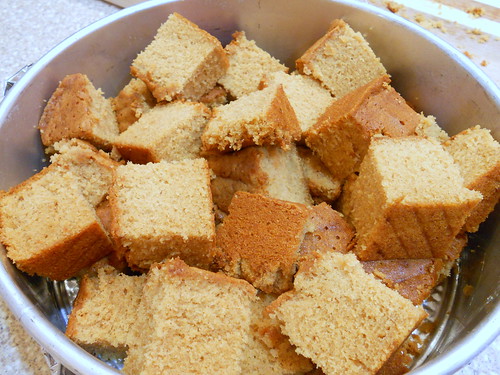 The cake is very moist and has a beautiful, tight, even crumb. Lovely.

You don’t have to do this of course. You’ll have a wonderful spice cake if you don’t caramelize some of the sugar, but the addition lends a lovely color as well as another layer of complexity and just a hint of caramely bitterness that I found Quite Intriguing in a good way. 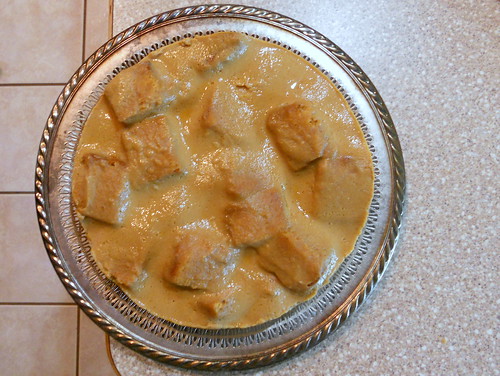 It’s kind of like a bread pudding made with cake, and instead of baking the custard, you just set it with gelatin. Sneaky, huh?

Once I had the cake, which I baked in two 9″ layers each weighing in at right around 30 oz of batter, I initially thought about making a trifle. What I ended up with is rather trifle-ish, but as I stabilized the custard with some gelatin, I ended up with a sliceable rather than scoopable dessert that would be right at home on Your Thanksgiving Table, especially garnished with some cinnamon whipped cream and some candied pecans. Which is what I did. See? 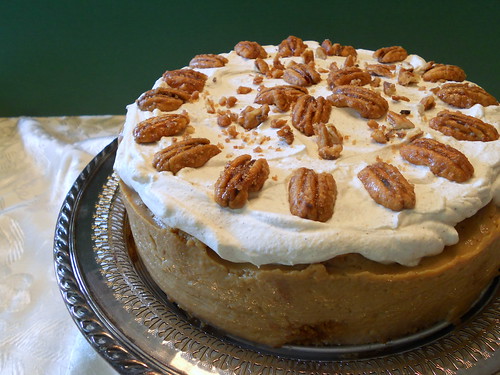 Anyway, this cake/trifle/Item tastes like fall, and that’s a welcome thing. The second cake layer, by the way, is wonderful just as pound cake. The caramel custard is definitely a Lily-Gild on my part, but I couldn’t resist.

And for those of you keeping score, Van Halen-wise: to my standard base recipe, I kept the 3 sticks of butter and added 2 ounces, by weight, of neutral oil. I caramelized 4 ounces of the 20 ounces of sugar I usually use and added that to 10.5 oz of whole milk. The custard is also my “standard” vanilla pudding. I caramelized the entire amount of sugar and mixed it with the whole milk before adding eggs, salt and flour (I was out of corn starch). Instead of my standard 1 yolk per cup of dairy ratio, I used 4 whole eggs to 6 cups of milk to cut the richness just a bit. I mean, it was going over a pound cake, after all! I also left out the butter. Because I am the Very Picture of Restraint.

If you just want to make the pound cake and not the custard, bake all the batter in a pan sprayed and well-floured 12 cup Bundt-type pan. At 350F, it will take about an hour, maybe a little more, to bake. Tent the cake with foil if it seems to be browning too quickly. Think about glazing it with a cream cheese glaze, or maybe w/some maple glaze. But honestly, it's lovely just as it is. I also think this would be the perfect cake to bake with streusel on it. Make a basic streusel mix with some chopped pecans in it and spread it generously over the batter in 2 regular 9"x2" cake pans. Bake until done and let cool completely in the pans. I think this would be amazing with a cup of coffee. Try it!

If you’ve never made caramel before, here are some pictures of What You Can Expect. 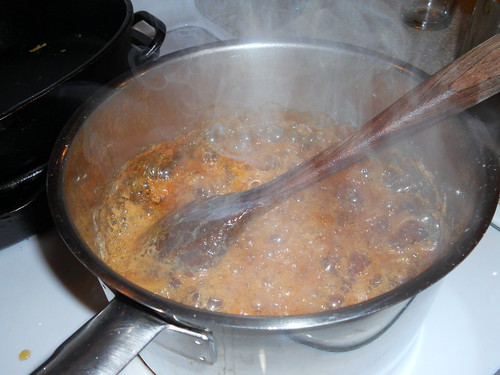 This is the sugar after I’ve added about a cup of milk. Note the Scarily Vigorous Boiling and Tremendous amount of steam and smoke. Be very careful when working with sugar. It’s about 350F and nothing to play around with. Use a pot that is Way bigger than you think you need and a wooden spoon with a very long handle. 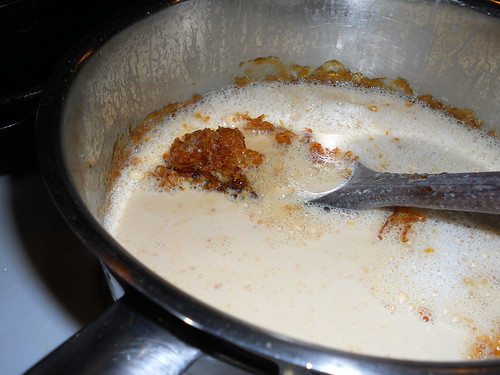 And this is after all the milk is in. No more crazy boiling, but the caramel has hardened up. This can be Disconcerting if you’re not expecting it, but Worry Not. Just stir over medium heat until it has dissolved. 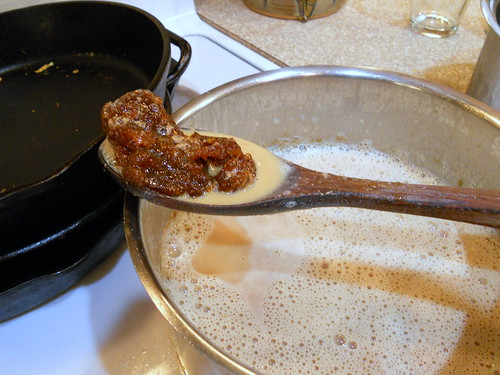 Note that the more of the caramel that dissolves, the more the milk starts taking on color. 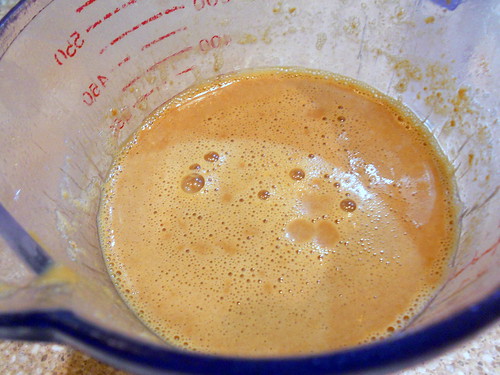 The above pictures are of the larger amount of caramel for the custard. Here’s a picture to give you an idea of the color of the “caramel milk” for the cake. Again, it’s 4 oz deeply caramelized sugar to 10.5 oz. whole milk.

And there you have it. The latest in my fun Food 52sday Series. We’re over halfway done now, but it’s never too late to start baking and cooking along. If you did play along this week, please post your results either here in the comments section and/or over on the fan page.

I gotta say, this is a darn lovely dessert. I hope you give it a try. If you’re not feeling the entire Deal, the pudding alone is comfort food at its best. And the pound cake alone is bursting with flavor. I’m pretty sure you can’t go wrong either way.

So, would you serve this at Thanksgiving for dessert? Let me know. Thanks for reading, and have a lovely day.